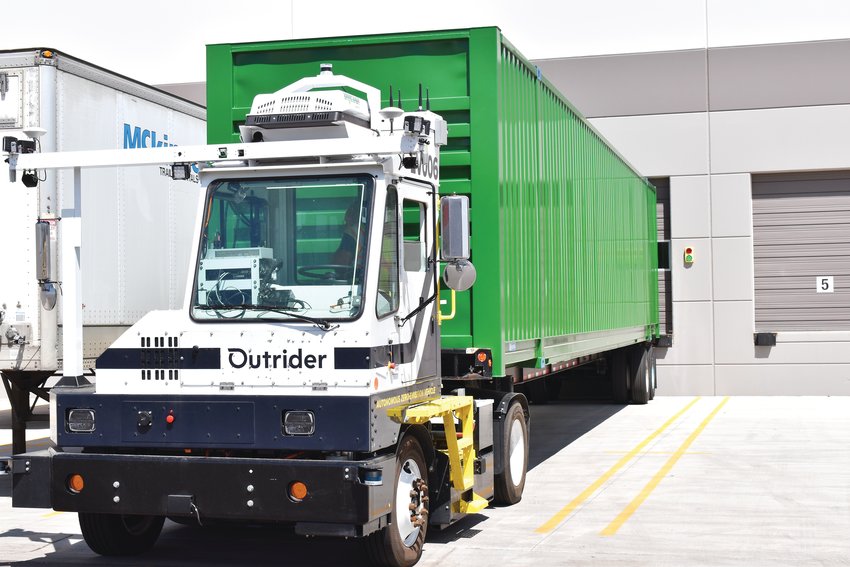 Brighton is getting a glimpse of the future as a Colorado company begins testing a warehouse relying on driverless trucks.

“The future distribution yard will be autonomous and electric,” said Andrew Smith, Founder, and CEO of Outrider. “Autonomy helps increase the efficiency and improve the safety of the distribution yard. And, when we standardize that autonomous system on an electric yard truck, we help make the movement of freight more sustainable. Outrider’s mission is to drive the rapid adoption of sustainable freight transportation.”

Golden-based tech firm Outrider opened its first testing facility site in Brighton on August 24, using self-driving trucks driven in a distribution yard with technology to move and park semi-trailers into loading docks to distribute freight and cargo. The facility, located at 22600 E. I-76 Frontage Road in Brighton, will be used both to assemble and test the self-driving vehicles.

The facility is a 200,000 square foot distribution yard build with 49 dock doors that will be operational 16-hours a day, five days a week. It will be expanding operations to 24-hours a day in 2022.

The autonomous trucks are assembled by the team with the autonomy equipment inside the Brighton location. Outrider begins with standard electric trucks from the original manufacturer.

“We outfit them and convert them to an autonomous vehicle. So, it takes a lot of sensors and cameras and then we tie it all together with software that makes the vehicle autonomous,” Londonne Corder, Vice President of Marketing.

Not only are the trucks autonomous, but they are also electric, Smith said, which will help reduce pollution. Each year in the US, diesel yard trucks emit 3.8 million metric tons of carbon dioxide, the equivalent of one coal-fired power plant, he added.

It can take up to three hours to charge each truck sufficiently using fast-charging equipment but Corder said the company is still collecting data on the length of a full charge.

“We made the conscious decision that we were going to standardize an electric fleet. Because we believe in the adoption of sustainable technologies,” said Corder.

Zackary Moss is an Autonomous test technician at Outrider for about a year in a half and had experience driving a truck for 10-years before he went back to school. He is a grad student studying for a master’s degree in aeronautics and is a part-time engineering student. His job is to test the self-driving trucks and report back to the developers.

“It’s actually how I got the job, they liked my background, and also the 10 years of trucking experience is what got me in the door,” said Moss. “Working with commercial vehicles that weigh 80,000 pounds, it’s good to have a background in it.”

Moss, said when a driver brings in the semi there is a lot involved with moving a trailer around a yard, and other trucks. They deal with blind spots in the dark, sometimes running into gates especially if they are not familiar with the area.

“Trucking is necessary and is the top 10 most dangerous jobs in America. I don’t know if that accounts for distribution yards, or over the road or a combination,” said Moss.

“This is an efficient system with a computer system that communicates with each other between docks and parking spots with one person dispatching it inside a safe, warm building or a cool building. It is ideal, and it’s working,” he added.

Over the road drivers will bring in the semi-trucks with a load or an empty trailer to a warehouse distribution yard. Drivers will park their trailers in a designated spot, then drive away.

Next, the autonomous truck moves in. It will be controlled by a computer software called “mission control” and monitored by an employee in the warehouse. The self-driving truck hooks to the trailer and moves it from the parking spot to the loading dock. Each self-driving truck has an arm that safely connects and disconnects trailer brake lines without human help.

“In today’s Distribution Yard unhooking a truck is a highly repetitive task done oftentimes inhospitable conditions. So you can imagine being outside on a day like this, having to get in and out of the truck multiple times hooking up the trailer and brake lines multiple times all day. It’s dangerous, “ said Corder.

Truck drivers say there is a lot of waiting around, she said – sometimes more than 45 minutes at each stop.

“They get paid when they’re on the road and the longer they wait, they are not getting paid. We want to get those drivers back on the highways and getting freight where it needs to go,” said Corder.

Corder said that for many of their Fortune 500 customers claim that driver safety is one of their main concerns. They want to keep their employees safe and get them working in better conditions and efficiency.

Inside its warehouse, each dock has a safety system that tells the autonomous computer and truck when it’s safe to pull away or open the door. Once the trailer is fully aligned with the dock, it turns on a green signal like a traffic light. Once it’s been emptied, it sends out an alert that the door is closed on the trailer and it can pull away.

Safety is a priory focusing on autonomous systems, the safety of the workforce, and customers on-site. They also are testing an obstacle detection and avoidance system using a mannequin named Roy Zinger. It is used to demonstrate to visitors that the autonomous truck can detect obstacles within certain distances quickly.

“Other companies in distribution yards are not the thinking about its entire system of the yard operations. They just focus on the truck. We focus on the entire operations such as the autonomous system talking to the dock area and how it works with other trucks in the yard. We have to take it into considerations,” said Corder.

Outrider tests different types of trailers to build a system that can be universal.

The test and field teams come from diverse backgrounds, with some having experience driving a semi-truck or managing a distribution yard. That is so they have real-world experience with today’s operations of yards, Corder said. People who are in the consultancy group have experience in supply change.

“We feel like we’re making a difference for people and getting them out of dangerous jobs and helping to address the environmental challenges with transportation and logistics spaces.”