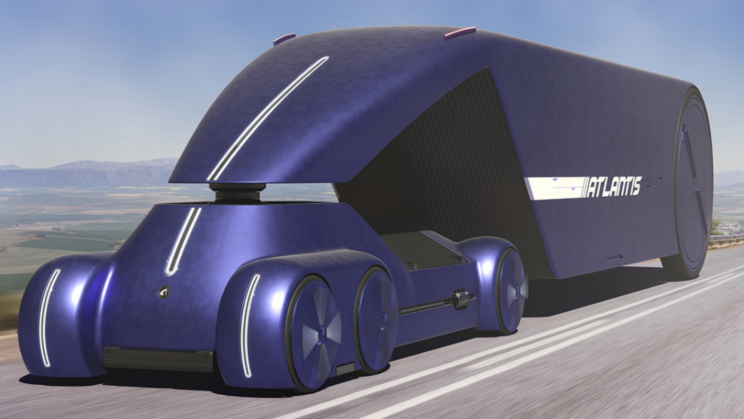 Russian designers Roman Dolzhenko and Dmitry Voronezhtsev put their imagination to test in a future where semi-trucks are not only electric but also fully autonomous, Yanko Design reported.

With the future of transportation for cars all set to be electric, all eyes are now on how the bigger haul vehicles will make their transition. While the biggest hurdle to overcome still remains the range of these vehicles, with automation also making progress, the designs of these trucks are also set for a change.

With their Atlantis, designers Dolzhenko and Voronezhstev imagine a future where these semi-trucks have reached Level 5 automation, where vehicles are completely autonomous and require no human intervention at all. In contrast, even as it is labeled ‘Full Self Driving’, Tesla is inching closer to a Level 3 automation, even as it aims to achieve a Level 4 someday.

When automation does reach the holy grail of a Level 5, the cabin with a host of safety features to protect the human driver inside will be unnecessary and can be shrunken in size, just enough to hold the electric motors, battery, and components of the autonomous driving system. What you end up with is a small yet powerful tractor that can pull a standard-sized container.

Since the semi’s aerodynamic features are lost with the removed cabin, the container structure would need to provide the contours needed to zip on the freeway and that’s what you see in these designs. To ensure that the load-bearing function does not fall on the tractor alone, the designers have given the container a huge set of wheels that move independently of the tractor and can navigate through tough corners as well.

Some might be quick to point out the flaws of this design when it comes to swapping these wheels if something went wrong with them while on the road. But in a world where we have achieved Level 5 automation, we are sure not only to have airless tyres but also systems to accurately predict risks of component failures and address them prior to starting a trip.

Big names in the automotive industry such as Volvo, Mercedes-Benz, Daimler are on the cusp of a new era with their electric semis and Tesla has been talking about self-driving for over five years now. The question is who will put their weight behind such a radical design.