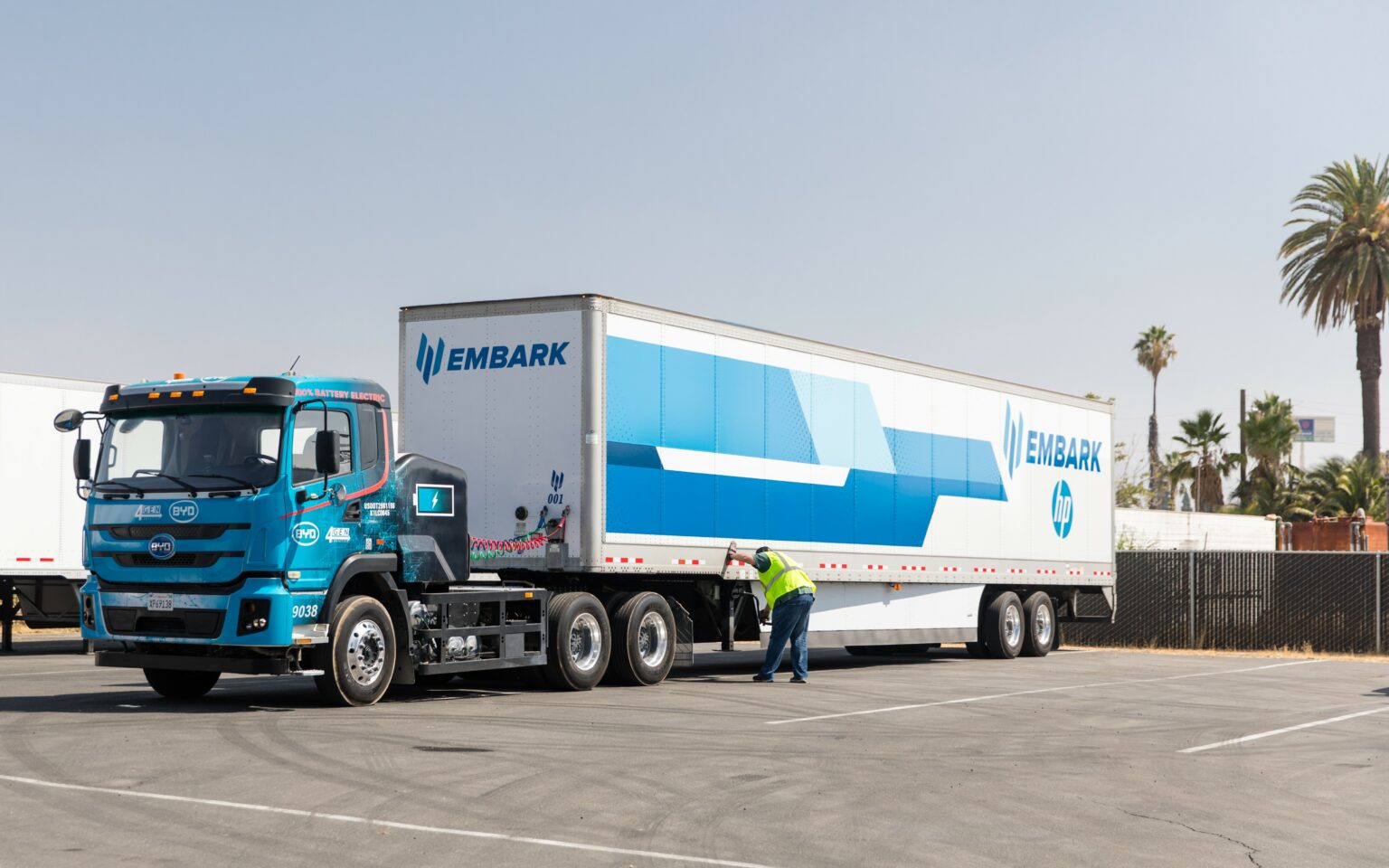 Autonomous software developer Embark Trucks is coordinating HP Inc.’s use of BYD Class 8 battery-electric trucks (BETs) to pick up and drop off loads of computer products where Embark’s supervised autonomous trucks can take over for freeway transit.

The pilot project is an extension of Embark’s work with HP, which in May began sending a load of printers a week from Los Angeles to Phoenix, the middle miles by human-supervised autonomous truck. The weekly drop-and-hook BET runs cover about 50 miles from Embark’s transfer facility to HP’s distribution center.

“We’re combining the best of both worlds with this partnership, pairing the middle-mile strengths of autonomous trucks with the sustainability benefits of electric trucks in urban road settings,” Alex Rodrigues, CEO of Embark, said in a press release. Embark is doing limited surface street testing but not for dense urban driving.

Adopting both long-haul autonomous trucks and BET drayage will enable HP to remove up to 50,000 tons of carbon dioxide and other pollutants from its distribution network over the next 10 years, according to preliminary research by Embark. HP (NYSE: HPQ) is part of Embark’s Partner Development Program.

Air pollution is especially bad in what are considered disadvantaged communities along drayage route. Idling diesel trucks account for a portion of the 32% of mobile source nitrogen oxide emissions that react in the atmosphere to form ozone and particulate matter. They can lead to serious medical conditions and early death from respiratory and cardiovascular problems.

For example, San Bernardino, home to much of Southern California’s trucking and warehouse infrastructure, had 130 bad air days for ozone pollution in 2020. New air quality regulations for warehouses in California’s Inland Empire have been in place since May.

The BYD 8TT electric trucks, operated by 4 Gen Logistics, have no tailpipes to emit greenhouse gases and harmful pollutants, They travel to and from Embark’s highway-adjacent transfer points in the Los Angeles area. Several truck manufacturers are testing Class 8 BETs and fuel cell electric trucks at the ports of Los Angeles, Long Beach and Oakland, California,

The nascent BET market is in the hundreds today but is expected to grow rapidly as California begins setting sales quotas for zero-emission trucks in 2024. Kenworth Truck Co., a unit of PACCAR Inc., said Monday that Knight-Swift, a Top 10 for-hire carrier, had ordered a T-680 electric tractor for drayage runs in Southern California.

BYD introduced a  third-generation 8TT at the Advanced Clean Transportation Expo earlier this month. It also showed a 6F Class 6 box truck for regional haul and distribution work that can be equipped with a body for refuse collection as well.

Embark expects to close a SPAC merger with special purpose acquisition company Northern Genesis Acquisition Corp. II (NYSE: NGAB) before the end of the year. Assuming shareholder vote approval, Embark would then publicly trade on the Nasdaq under the ticker symbol EMBK.