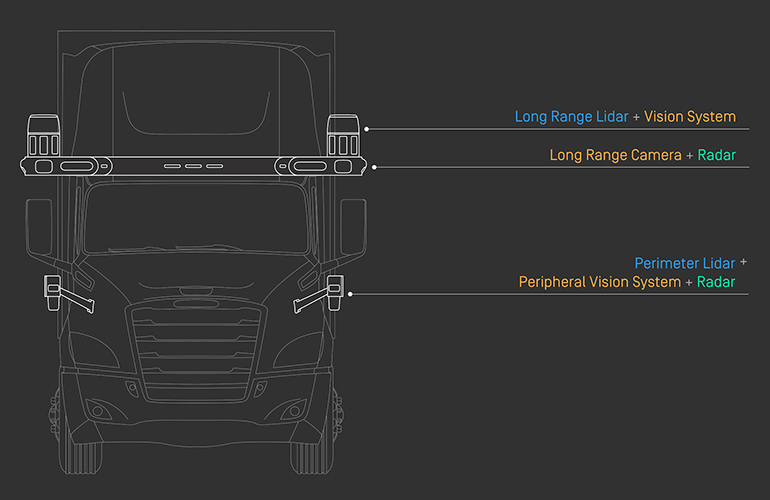 The Waymo Driver has been at work bringing on San Francisco streets providing taxi services, and trucking on highways between Dallas and Houston for over a month now. Where it’s a car or a Waymo’s semi-truck Waymo Via, the Waymo Driver is up to the task.

Part of what makes Waymo’s system successful is the fact that it has millions of miles of real world and simulated driving experience that it uses in its trucking and taxi services. However, getting the Driver ready for autonomous trucking presented its own unique difficulties.

The first challenge that Waymo had to face was the fact that Class 8 trucks are simply bigger than passenger cars. They require more space to turn, and have to do so at a slower speed. If the truck is transporting a full trailer, then the process becomes even more tedious.

Next, Waymo researchers had to consider the way that Class 8 trucks move. Truck cabs sit on shock absorbers above the wheels, which means that oftentimes the cab moves independently from the chassis below it. Not only does that put sensors farther away from the road, but it increases the amount of vibrations and movement the sensors have to endure.

The truck also moves differently depending on what it’s carrying. A full trailer of liquid is going to move differently than a trailer full of pillows.

To combat these issues, Waymo made longer range sensors that could detect objects at greater distances. This helps to combat the sheer size difference between a Class 8 truck and a passenger vehicle. They also needed to help the Waymo Driver understand how different parts of the truck moved independently, to get a full view of the trailer in motion.

Class 8 trucks also need to be more reliable than passenger vehicles. It’s possible that a truck could be transporting goods across hundreds of miles every day. Waymo has been working with Daimler Truck to build a redundant, L4 ready chassis for the Waymo Driver.

Waymo’s cars have three types of sensors: LiDAR, cameras and radar. Each sensor works together to give the vehicle a clear view of the world around it in any condition, and Waymo adjusted each sensor to be better suited to trucking.

Waymo’s LiDAR sensors sit higher up on a truck than they would on a car, so Waymo had to offset that change by giving its perimeter LiDAR a longer range. The perimeter LiDAR works alongside a shorter-range LiDAR, to give the Driver a unified view of the environment all around it.

Waymo’s Via trucks spend much of their time on long stretches of highways, which means that Waymo’s cameras need to be able to see things at greater distances to better predict and plan what the truck will do next. The cameras on Waymo’s trucks can see and classify objects up to 1,000 meters away. The trucks are also fitted with thermal cameras to improve visibility at night.

Radar sensors help the car to see in less than ideal conditions, like fog and rain. They’re unaffected by over-exposure, a low-angle sun or under-exposure at night. Waymo’s radar sensors can detect and track objects over 500 meters away.

Typically, Waymo’s self-driving system has a single central perception dome on top of the car, but that isn’t possible with Class 8 trucking. Waymo couldn’t put any sensors on top of the cab, as it would make the truck too tall to clean overpasses.

Instead, the company put it’s sensors on a single horizontal bar across the truck’s cab. This provided a rigid base for the sensors, which helped combat the movement of the cab. With LiDAR on each side of the bar, the Driver is able to keep track of the movement of the trailer behind it and make decisions with that in mind.

Designer Showcases What Futuristic Electric Semi Trucks Should Aspire For