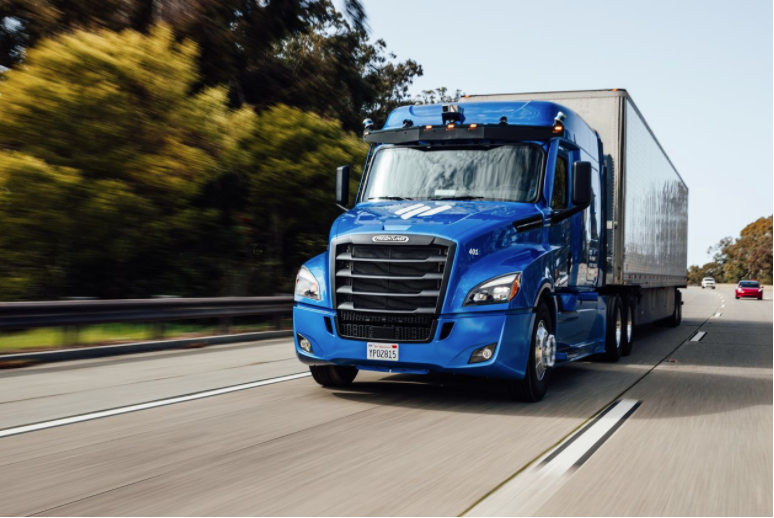 Embark Trucks, an autonomous trucking startup, has just gone public in a SPAC merger valued at about $5 billion (Nasdaq: EMBK) – just as a shortage of truck drivers has emerged as a key contributor to supply chain disruptions.

So speaking to Alex Rodrigues, Embark’s founder and CEO, two questions come top of mind: Can autonomous trucks make supply chains more efficient and resilient? Unsurprisingly, he believes they will. But then, if someone today wanted to become a truck driver, what would be his advice? His second answer is more surprising:

“They should definitely do it – affirms Rodrigues – we will continue to need more truck drivers for a very long time. Everybody who starts a career as trucker today will be able to retire as a trucker if they want to – and doing a better, easier job than today.”

Though Rodrigues has just become one of the youngest CEOs of a US listed company (he is only 26), he has already accumulated fifteen years of experience in robotics, since he started building robots when he was just eleven years old. And while he is extremely optimistic on the future of automation, this experience has given him a very pragmatic view of what automation can achieve in the near future, and what it cannot.MORE FOR YOUWhy You Need To Visit This Newly Renovated Architectural OasisInvestors Feast On Sweetgreen IPOQualcomm Showcases Diversification, Growth And Resilience At Investor Day 2021

In this recent interview, Rodrigues discusses Embark’s strategy and his vision for the future of transportation. He believes self-driving trucks will rapidly take over the long-haul transportation market, covering thousands of highway miles without needing a break to eat or sleep. But outside city centers, humans will take over: Rodrigues envisions a system of transfer points, such as yards and warehouses where the trailers will be taken over by traditional trucks that will cover the “last mile” and take care of final delivery.

Truck drivers, he points out, do a lot more than driving: they supervise loading and off-loading, interact with customers, in some cases negotiate gates and driveways. It will be a very long time before all these tasks can be automated. Plus, he stresses that short-haul jobs tend to be a lot more attractive because they allow truckers greater predictability and more time with their families. And Rodrigues argues that by making trucking more efficient and competitive, autonomous solutions will create more of these jobs.

The greater efficiency is generated by the fact that autonomous trucks never need rest, and therefore can cover distances in a much shorter time than a human driver could: they could cut down the time of driving from California to New York from five days to two, for example. This can reduce costs to the fleet operator from 1.76 per mile to 0.96 per mile, says Rodrigues, a nearly 50% saving (this holds for the “middle mile”, where autonomous trucks will be deployed, leaving aside the costlier initial and last mile).

Embark’s business models centers on compatibility with multiple redundant chassis platforms. Embark does not build trucks; it is a Software-as-a-Service (SaaS) company: it develops an “incremental autonomy package” composed of a suite of sensors and software that can be installed on trucks, and then licenses the software to the fleet operators. Embark adopts a modular manufacturing approach, says Rodrigues: they spec out the sensors and software, and work closely with truck manufacturers and fleet operators to ensure they can get trucks with the required specifications from their preferred truck manufacturers. This allows them to work with some of the biggest truck fleets, like Knight-Swift, DHL and Werner; then Embark supervises the software and the fleet operators maintain control of operations.

Rodrigues sees this as a key competitive advantage for Embark: “Almost none of the major fleets works with a single truck manufacturer, the majority work with three or more; Nobody else is targeting three or more truck manufacturing platforms, so often we are the only one that can meet a fleet’s needs across their different platforms. Our focus is on developing an autonomy package that is as easy to integrate with any chassis platform.”

Autonomous trucks don’t need rest, but are they always as good as human drivers at handling the many different situations they can encounter on the road? According to Rodrigues, a fair answer would be “almost always”. Embark’s AI has already been trained on well over a million of actual driving miles on US highways, and Embark’s software engineers are constantly working to identify “edge cases” and improve the AI’s performance. “Edge cases” are those where the AI might not be able to recognize an object or a situation, usually because it hasn’t encountered it often enough in the past. These tend to be rare, says Rodrigues. Overall, the AI has a huge advantage over human drivers: it has literally eyes in the back of its head, it can simultaneously see at 360 degrees around the truck all the time, and has additional senses like radar and lidar. Plus of course it never gets distracted, and it can afford to be more patient than an actual driver on a tight schedule will usually be.

If Alex Rodrigues is right, the cost advantage and greater safety of autonomous trucks should encourage rapid adoption on US highways in the coming years. Will that go hand in hand with electrification of trucks fleet to reduce emissions? For passenger cars, most experts see a synergy between electrification and self-driving technology. For trucks, however, that will not necessarily be the case, as Rodrigues explains in his interview.

Embark looks set to play a decisive role in shaping the future of transportation. And young pragmatic innovators like Alex Rodrigues are determined to help new technologies gain traction, scale, and transform the way we live and work.