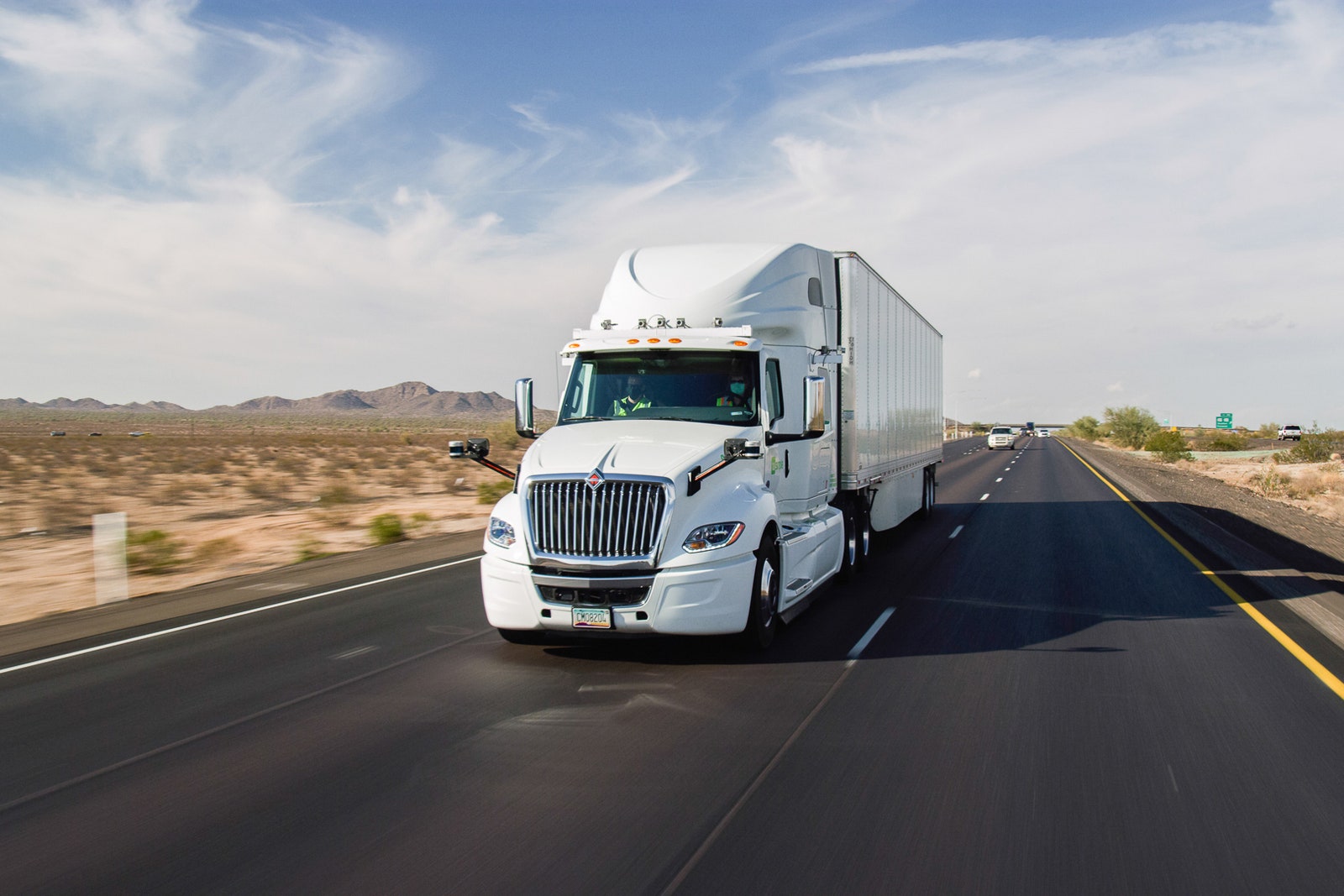 Money is pouring into autonomous trucking startups, just as many are souring on the short-term prospects for self-driving cars.

IN 2016, THREE veterans of the still young autonomous vehicle industry formed Aurora, a startup focused on developing self-driving cars. Partnerships followed with major automakers, including Hyundai and Volkswagen. CEO Chris Urmson said at the time that the link-ups would help the company bring “mobility as a service” to urban areas—Uber-like rides without a human behind the wheel.

But by late 2019, Aurora’s emphasis had shifted. It said self-driving trucks, not cars, would be quicker to hit public roads en masse. Its executives, who had steadfastly refused to provide a timeline for their self-driving-car software, now say trucks equipped with its “Aurora Driver” will hit the roads in 2023 or 2024, with ride-hail vehicles following a year or two later. This month, the company announced it would go public via a reverse merger, raising $2 billion in the process. “We have a team that really understands how hard this problem is,” says Urmson.

The move points to a growing consensus in the industry: If self-driving vehicles are going to happen, trucks will likely arrive before cars.

For evidence, follow the money. Investors have poured $11 billion into autonomous truck startups in the past two and a half years, more than $5 billion of that in the first five months of this year alone, according to the data and research company PitchBook. Aurora last week announced plans to go public, joining a convoy of other autonomous truck startups: Embark Trucks in June and the companies Plus andTuSimple in the spring. Competitors Waymo—a Google sister company—and Locomation are reportedly eyeing similar moves.

The investor enthusiasm for self-driving trucks reflects a view that the business case may be more appealing than that for self-driving cars, which companies have said will make their debut as robotic ride-hail vehicles. Traditional truck makers and carriers are signing deals with tech companies, signaling optimism in the self-driving future. And the pandemic showed just how vital trucking and logistics are to the economy.

“This is a snowball effect, and building steadily,” says Don Burnette, cofounder and CEO of Kodiak Robotics, another self-driving truck startup, which recently announced investments from BMW i Ventures and tire maker Bridgestone.

Another reason autonomous trucks may arrive before cars: For now, they’re only tackling the easy parts of self-driving, and they’re skipping some of the hardest. The makers of self-driving trucks are focusing on highways, which are generally wide and smooth, with steady traffic flow. They anticipate staging drivers at exits, to handle the more challenging local streets. But that’s precisely where robotaxis will be most in demand. They’ll have to contend with less predictable characters, like people on foot, bike, and scooter. Building software to predict the movements of that group is a harder job.

Of course, self-driving trucks rely on much of the same technology as self-driving cars, and so truck makers had the benefit of a running start, if you will, leveraging more than a decade of hard-won lessons. At Waymo, engineers collaborate across vehicles on common software and hardware-integration challenges, says Charlie Jatt, the company’s head of commercialization for trucking.

But these days, trucks look like a more appealing bet. The American Trucking Association says shippers paid $791 billion to move goods by truck in 2019; by contrast, Aurora estimates the annual market for ride-hail vehicles at $35 billion. Tech developers reason that if they lower the cost of shipping, they can keep a cut of the savings. “There’s clearly a need for robotaxis in dense cities, but outside dense cities, where everyone has their own car, you need to create demand,” says Asad Hussain, who analyzes mobility companies at PitchBook.

The makers of self-driving trucks say their technology will save shippers money. Embark says its self-driving technology, which it hopes to sell to fleet operators as a subscription, will save 80 cents per mile, cutting costs compared to human-driven trucks in half. Robots, after all, don’t need to be paid and don’t need rest breaks. They won’t quit, sparing carriers labor shortages. And robots don’t have a union. Human drivers might continue to handle short-haul trucking jobs, the companies say, a more localized job that will allow them to spend more time at home rather than on the road.

The company Plus, which is testing self-driving trucks in China and the US, says its first trucks will help human drivers do their job more safely, and will collect data as they go. Eventually, around 2024, the company hopes to put that data to work when it pulls the human from the car. The process will “take some time,” says founder and CEO David Liu.

The union is skeptical. “Embracing technology as some sort of cure-all for the problems that plague the industry is missing the mark,” says Sam Loesche, senior legislative and policy representative of the International Brotherhood of Teamsters.

Some of the recent investor enthusiasm reflects the new-found importance of logistics amid pandemic-related disruptions, including traffic jams at ports and driver shortages that led to shipping delays. “It’s the Amazon effect, where everyone got comfortable getting everything delivered with the click of a button,” says Jim Scheinman, managing partner of seed-stage venture firm Maven Ventures, which has invested in Embark.

“Embracing technology as some sort of cure-all for the problems that plague the industry is missing the mark.”, SAM LOESCHE, INTERNATIONAL BROTHERHOOD OF TEAMSTERS.

The investor frenzy follows a series of buzzy partnerships between tech developers and traditional truckers and shippers. Embark is working with big-name shippers like HP and ABInBev, and with carriers like Werner Enterprises and Knight-Swift Transportation. TuSimple is running pilots with UPS and working on a custom-built vehicle with truck maker Navistar. Aurora is working with truck builders at Paccar and Volvo. All this seems to have convinced the money people that self-driving trucks are the real deal.

And yet, there’s still not a true driverless truck—and may never be. Self-driving trucks present a tantalizing safety opportunity—truck driving is one of the most deadly jobs in the US, according to the Labor Department—but an 80,000-pound missile moving at 70 mph can cause a lot of damage. Because self-driving trucks are so heavy and go faster than cars on city streets, they need to be able to see farther down the road—no small technical feat. So far, companies have run limited demonstrations and pilots of their technology, but all have had safety drivers in the cab.

Unlike self-driving car companies, which have missed plenty of self-imposed deadlines, the trucking companies haven’t yet had as much time to fail. “Maybe when the timelines get extended or there are crashes, investors will say, ‘Oh, how come it isn’t being delivered? Why aren’t you on track?’” says Bruno Bowden, an engineer who worked for Aurora and is now an angel investor. (He has a stake in Aurora.) The technology is getting savvier—one day, the investors might too.