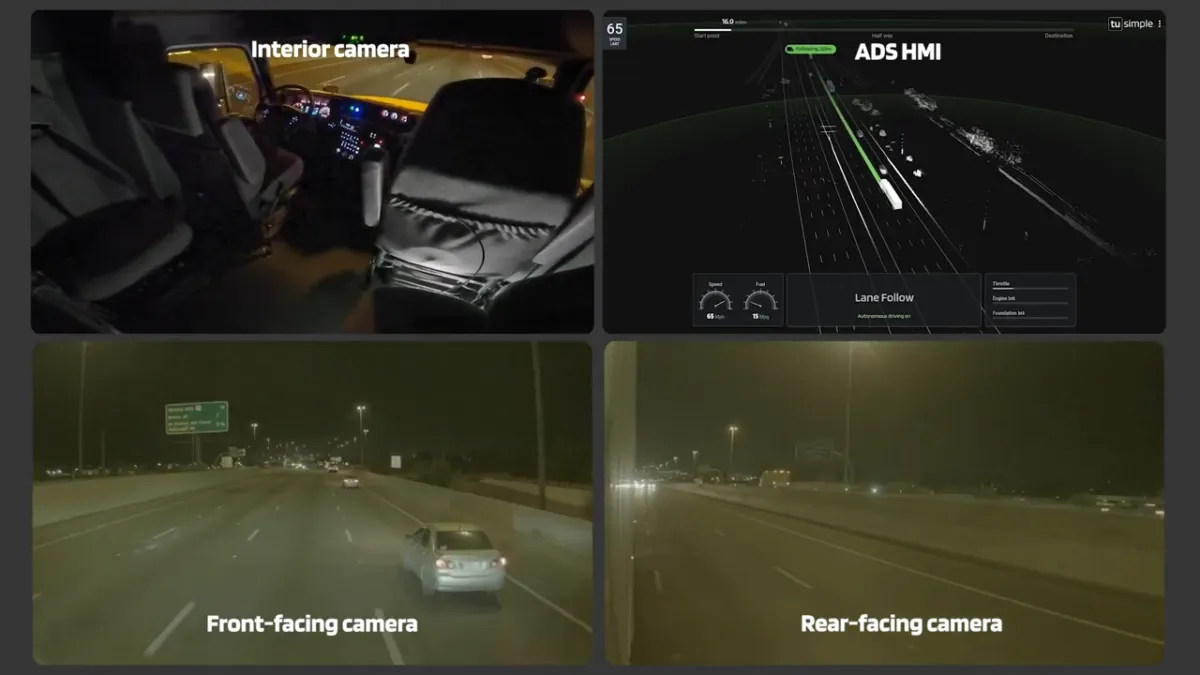 “Driver-out proves we are feature complete, which means our autonomous driving system has all the capabilities required for true driver operations along commercial routes. And that it is able to safely mitigate or contain all the edge cases during operations,” CEO Cheng Lu told analysts on the company’s Q4 earnings call after markets closed on Wednesday.

TuSimple Holdings (NASDAQ: TSP) conducted the first of seven 80-mile runs with no one in the cab last Dec. 22. The company said one pilot run required activating a minimal risk condition, in which the truck guided itself to the side of the road due to equipment failure in a chase vehicle.

“The minimal risk condition was triggered by design; the vehicle came to a controlled stop, and it further proved our safety case,” Lu said. “We fixed the equipment issue and completed six perfect continuous driver-out runs afterwards.”

TuSimple,and the first to conduct a freight run with no human in the cab, will expand driverless operations to add daytime runs and begin operations in the Texas Triangle of Dallas, Houston and San Antonio later this year.

“Everyone in this industry is trying to create a driverless truck,” Lu said. “Only TuSimple has been able to accomplish repeatable driver operations on a rail freight route on open public roads. In the autonomous driving world, big claims are common.

“With this achievement not only are we the clear industry leader, but further show our track record of hitting milestones on time.”

TuSimple uses a survey vehicle about 5 or 6 miles ahead of a Navistar International LT retrofitted with its software. A chase vehicle with the ability to put the truck into the minimal risk, or fail-safe, mode, and unmarked Arizona police cars in regular traffic more or less create loose coverage around the autonomous truck.

Eventually all three will be removed from the operation, reducing costs and further proving the mettle of the TuSimple system.

“To commercialize, it requires us to have continuous autonomous freight operations on high-volume routes at a competitive per-mile operating cost relative to that of manually driven trucks,” Lu said.

“We expect to be hauling customer freight on multiple routes in the Texas Triangle along [Interstate] 10. And we expect to have a clear line of sight on a per-mile unit economics being lower than that of human-operated trucks.”

The company now owns more than 100 Class 8 trucks, about 75 of which are in the U.S. Half of those are hauling freight with human safety drivers.

TuSimple posted $6.3 million in 2021 revenue from freight runs for a variety of customers in the Sun Belt, notably United Parcel Service, CFO Pat Dillon said on the call.

As a startup, TuSimple is still a long way from profitability. The company lost $116 million in Q4 and $411 million for the full year as it increased spending on research and development and the hiring of engineers and software developers, and made $1 million in equipment purchases.

Earnings before interest, taxes, depreciation and amortization in Q4 was a negative $81 million compared to a negative $38 million in the same period a year ago. For the full year, the adjusted EBITDA loss was $279 million.The projected EBITDA loss for 2022  is $400 million to $420 million.

TuSimple had $1.3 billion in cash at the end of December. “We remain very well capitalized to execute on our road map through 2024,” Dillon said.

Cowen Inc. analyst Jeffrey Osborne lowered his target price for TuSimple shares to $21 from $38 but remains positive on the company’s prospects. TuSimple was the first autonomous trucking company to go public last April.

“We like the approach that TuSimple is taking and we believe the company has made a great deal of progress in hardware and software development, as well as developing OEM relationships relative to many of its peers,” Osborne wrote in an investor note Thursday.

Societal acceptance, regulatory approvals, and insurance validation and approvals are not things TuSimple can control, he said.

“We also note the extremely competitive environment in the sector and believe it’s too early to call winners and losers.”

Said Morgan Stanley analyst Ravi Shanker, who is also positive on TuSimple: “TSP is doing everything it possibly can to demonstrate to the market that autonomous trucking is real with repeated driver-out tests, strong partnerships and even effectively pulling forward the timeline of commercialization to the end 2023, which has rarely, if ever, happened in technology disruption industries.”