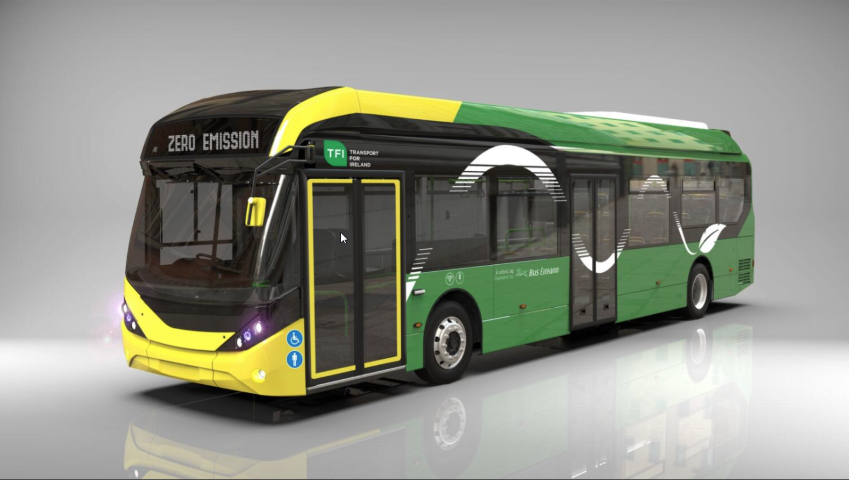 Bus Éireann has estimated that 60 tonnes of carbon per bus could be saved annually when the Athlone town service goes electric later this year, the first town in Ireland to do so.

In transport terms, Ray Connolly, who is Senior Technical Manager in Engineering with Bus Éireann likened the move to an electric town bus service in Athlone to electricity coming to rural locations many decades ago in terms of the “cultural change” in the transport sector.

The project is being funded and the vehicles procured by the National Transport Authority (NTA), in collaboration with Bus Éireann, which operates the Athlone town bus service. The NTA has put the investment in the 11 electric buses in Athlone at €5 million-plus, and it expects the new electric service to be launched towards the latter end of 2022.

In the meantime, there is quite a body of work to be done before the launch, according to Ray Connolly, who is Senior Technical Manager in Engineering with Bus Éireann.

“80% of the bus is very similar to a standard diesel bus in terms of seats, the body, all of that, but it’s down where the engine would have been you have big battery packs, which are high voltage, 600 volts, that sort of thing. So if you think of the sockets in your wall they are 240 volts so these buses will be working on 600 volts. Most diesel buses work off a 24-volt system so there is a huge difference in that context,” Mr Connolly commented.

He acknowledged that there is a huge amount of driver training needed before the fleet comes stream, along with upskilling at the maintenance depot in Athlone to deal with high voltage vehicles and the operations team.

On the ground, work is going on in the background to get the infrastructure in place, a planning application is currently before Westmeath County Council in that regard, and he said one of the big things is to get the electricity supply into the depot increased to allow them to charge all of the buses. It will also mean an upgrade of the garage, putting in a substation and charging infrastructure at their Southern Station Road site.

“It’s a big story for Athlone, a great story. We originally proposed Athlone, we looked at the locations we have, and Athlone is geographically bang in the centre of the country so what better place to start off the very first electrification project. It always will be the first town to have its buses electrified and with zero emissions so it’s a great story. It’s a complete first and the great thing is it always will be,” he remarked.

“It’s nearly like when lights were switched on first in rural locations, and electricity came in. It’s a big, big change and I think it’s a great story for Athlone,” Mr Connolly continued, adding that they and NTA chose the service to go electric because the depot is in the centre of the two town bus routes making it very suitable for the historic change.

Tenders have already been sought for the infrastructure needs, and pending planning, he expects that to move fairly quickly, given it’s not a huge construction project.

Given all the different parts in the project, Mr Connolly said he’s “pretty confident” that there will be movement in the second half of the year.

Vehicle testing will be another big job before the new electric town bus service is launched, Ray explained, something Ian Gourley, who is Transport Fleet Manager with the National Transport Authority, gave more details on.

“We’re expecting to have the first completed vehicle in the factory in the next two to three months and then there will be another two or three months of testing and certification after that so sometime during the summer we should have vehicles in Ireland, but after that, there will be a fair bit of training and gaining experience of it before we launch the service,” Mr Gourley outlined.

While the purchase price is higher than a diesel bus, he stressed that over their lifetime the electricity costs less than the diesel, and there are other savings on maintenance.

Mr Gourley also hailed a“significant saving in terms of carbon and an improvement in air quality” which will enable them to meet climate action targets in an Irish and European context.

The buses are being manufactured by Alexander Dennis Ltd, who are based in Scarborough in the North East of the UK. On the question of whether electric buses could be rolled out on other services in the future, Ray Connolly from Bus Éireann confirmed it is something they are examining at present.

“Electric technology at the moment is a little bit constrictive on range so whether it ever gets to that (the longer routes) or not. We’re looking at other things, we have three hydrogen buses on the road up in Dublin at the moment so we’re testing that technology to see what that can do.

“It’s an electric bus too but it has a longer range because it has the hydrogen fuel. We’d see that as a serious contender for the longer distances in the future as well,” he predicted.

“You’d probably expect 60 tonnes of carbon per bus a year (in Athlone), that’s a rough estimate. What will really tell us is when we get the wheels moving. It should be something around that, the three buses in Dublin are working at around 75 tonnes a year per bus.”

Should the 1,000 buses in the fleet all go the zero emissions in the future, it would result in massive carbon savings, he finished.