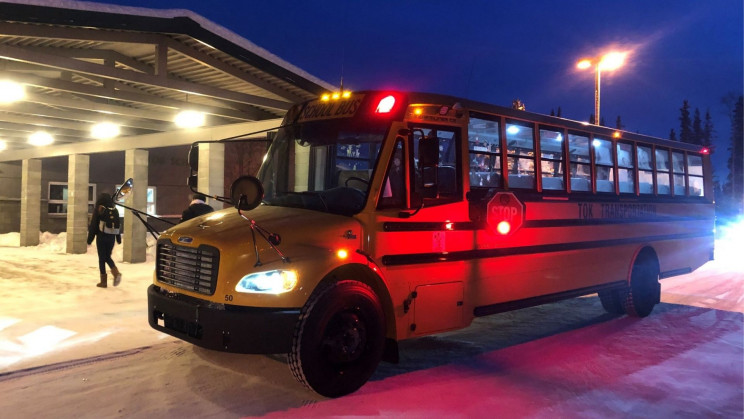 Taking the school bus to get to school is a long-established routine for children all around the world.

But they’re in fact pretty hazardous. To put it in numbers, 24 million children travel on 454,000 school buses in the United States. And these buses travel more than four billion miles each year with kids spending 3 billion hours on them. Considering that about 90 percent of these buses run on diesel fuel, they annually emit 3,000 tons of cancer-causing soot and 95,000 tons of smog-causing compounds.

Electrification of the school buses

Going strong even at -40 °F in the town of Tok, Alaska, the Thomas Built bus is Alaska’s first and currently only all-electric school bus, since October 2020. And despite being capable of 138 miles (222 km) per charge, the zero-emission bus usually covers 30 miles (48 km) on a daily basis.

Saying that he was impressed by the bus’ performance, Gerald “Stretch” Blackard, the owner of Tok Transportation, said “The bus has been performing well, and it has definitely lived up to expectations. In fact, it has exceeded my expectations in cold weather, which is often sub-zero temperatures. It has performed seamlessly, and the heating system, which also runs off electricity, works well to keep the bus warm,” in an interview with Thomas Built Buses.

The company behind the electric school bus hiring, Tok Transportation, bought the bus for $50,000 while the bus is actually worth a whopping $400,000. The company had help from an Alaskan Energy Authority grant that covered $350,000 of the total sum in addition to paying for solar panels that charge the bus.

How did it all start? Regarding his revolutionary idea, Blackard said that “We had a grant available for an electric school bus, so I wanted to give it a shot. An electric school bus ties into the sustainability efforts of some of our schools, plus, whoever heard of an electric school bus in Alaska? I have always had an interest in trying new things. When someone says something can’t be done, I always want to try it for myself.”