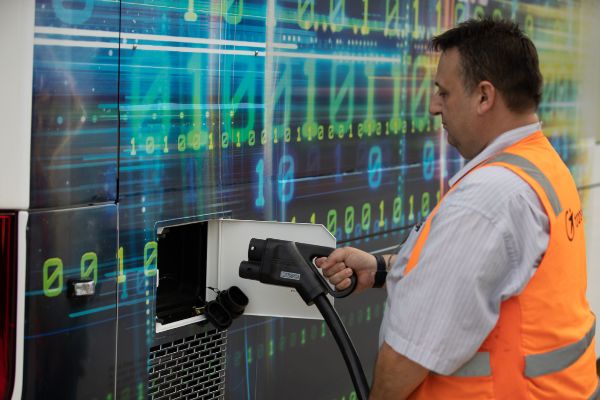 Transdev’s efforts to introduce more zero emissions technologies into its operations have been acknowledged at the International Association of Public Transport (UITP) Global Awards with the company being recognised as a Finalist in the Sustainability category.

The Awards, held in Dubai on 6 February, are designed to recognise the most innovative, ambitious and solution-driven projects from the public transport sector.

In 2021, the company took significant steps forward to decarbonise its operations across Australia and New Zealand, introducing new electric and hydrogen powered fleet and driving down emissions through highly advanced telematics.

Transdev Australasia CEO Luke Agati said the accolade as a Finalist was recognition of the work that was underway across the company.

Transdev Australasia CEO Luke Agati said the accolade as a Finalist was recognition of the work that was underway across the company.

“We continue to be fervent advocates for cleaner, greener, zero emissions technologies and have set a target of reducing our emissions in Australia and New Zealand by 30% by 2030,” Mr Agati said.

“Transdev has remained ahead of the curve and have invested our own resources to introduce new state-of-the-art sustainable fleet and drive positive environmental outcomes with suppliers.

“By harnessing strong and trusted partnerships with our public transport agencies and suppliers we have had the opportunity to introduce new innovations to market, such as operating the first hydrogen powered bus in New Zealand and delivering Australia’s very first 100% solar powered full-size bus.”

Mr Agati said Transdev was exploring opportunities to introduce new hydrogen fuelled vehicles into the Australasia region following the news that the company was set to test the world’s first hydrogen powered train in Germany in 2023.

“Hydrogen fuelled transport is fast becoming a reality,” he said.

“New and emerging technologies will make it cheaper and more sustainable for governments to introduce hydrogen powered fleet, whether it be buses, trains or ferries.

“Analysis of the industry suggest that prices for green, sustainably sourced hydrogen will halve over the next decade, making it a far more competitive and value-for-money option over traditional fossil fuels.

“It only takes one pathfinder vehicle or innovation to help instigate widespread industry change. Over the last two years, already we are starting to see a shift in the availability of diesel fleet as more operators and public transport agencies are favouring electric vehicles.”