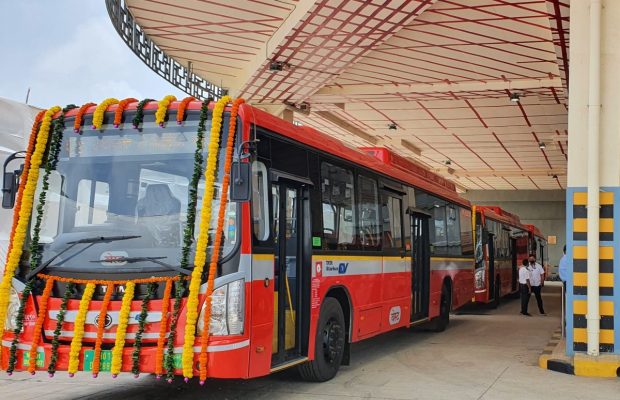 The need to reduce the dependence on imported oil, and the growing concerns over climate change have been the key drivers to the growth of electric vehicles (EVs) throughout the world. To keep pace with the global economy, various policy initiatives have been introduced by the Indian government since 2007 to give an impetus to the high-potential EV industry. Further, the government’s goal to achieve net-zero emissions by 2070 as committed during the recently held COP26 summit, further presses the need to focus on EVs as the ‘future of mobility’.

Given that the ratio of cars per thousand individuals is far less in India than in developed countries like the USA, UK and Australia, the dependence of majority of the population on public transport will continue. Hence, in order for India to reduce its carbon emissions, focus has to be on the mass scale electrification of public transport, in which e-buses will play a crucial role.

In view of the various policy initiatives and the rising EV revolution, while a great response has already been shown by the existing Indian market players in the 2 & 3 wheelers segments (which require relatively less capex); the existing commercial vehicle players have either entered or are in the process of entering the EV space.

As per a report, in the year 2020 around 5,15,600 EVs were sold in India, which included only 600 e-buses(1). Further, according to a report issued by SMEV, around 2,36,802 EVs were sold in India in FY20-21, and as per market sources e-buses accounted for only a small portion of the cumulative EV sales(2). In respect of the market players, until the FY20-21, about 74% of the total e-bus supply orders in India were catered by relatively new market players(3).

The e-bus reforms in the country have been largely driven by incentives offered by the government, and few of the key initiatives contributing to the growth of e-bus industry are:

(i) FAME II, with an outlay of INR 10,000 crores, is aimed providing upfront subsidies and creating EV charging infrastructure. This scheme proposes to support 7,090 e-buses with an incentive of up to INR 50 lakhs each. Bids to procure 5,580 e-buses have recently been sought by CESL under the ‘Grand Challenge’ as part of FAME II.

(ii) National Programme on ACC, with an outlay of INR 18,100 crore, is aimed at incentivizing setting up of manufacturing facilities for 50 GWh of ACC and 5 GWh of niche ACC technologies.

(iii) PLI scheme for automobile and auto components, with an outlay of INR 25,938 crore, is aimed at incentivising manufacturing of high technology automobiles and automotive components in India.

In addition to the above, several initiatives have been introduced like reduction of GST on EVs, introduction of vehicle scrappage policy, de-licensing of public charging stations, etc.

Despite the aforesaid the Indian e-bus revolution has not grown to the targeted levels, and is facing its own set of challenges, some of which are as under:

(i) Dependency on imports: While chassis and bus bodies of the e-buses are being manufactured locally, the e-bus industry is still largely dependent on imports from select players for a variety of EV components and batteries.

Lastly, as both the government and public are becoming more aware about the much needed switch to e-mobility, it is equally important to understand that the presence of e-buses will only be felt when an entire eco-system is developed for such buses, the role of government departments is streamlined so as to ensure an adequate demand-supply equilibrium, fiscal benefits and incentives are continued to be provided, and R&D on more efficient and cost effective technologies is encouraged. It would be interesting to examine whether the upcoming Union Budget will be able to deliver to the expectations of the industry.