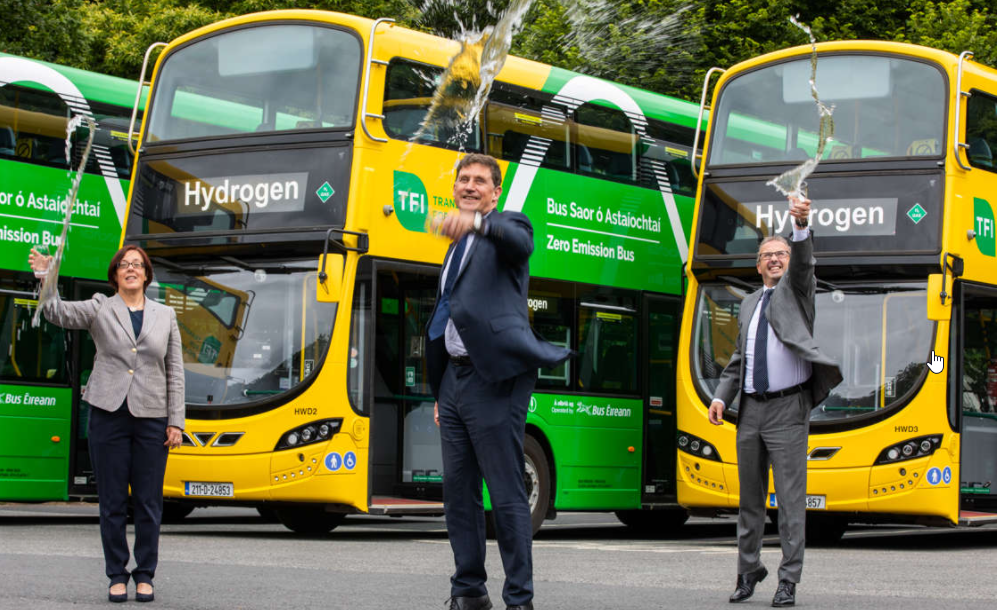 Transport, Climate and Environment Minister Eamon Ryan launched the 2.4 million pilot scheme on Tuesday, with the fleet set to operate from next week on commuter services in the Greater Dublin Area.

It is the first scheme of its kind in Ireland and the buses are three of only 4,200 hydrogen powered vehicles worldwide.

Minister Ryan said: “I hope this will be the first of many of these types of buses.

“They particularly work on longer routes, where your battery wouldn’t be as easily recharged.

“This can be refuelled overnight, the fuel cell powers the battery and runs the bus.

“You have all the benefits of an electric system, but that fuel cell running it means we don’t have to charge it during the day.

“I think there’s going to be a real place for hydrogen in our transport mix. In the heavier transport modes, including these sort of bus uses.

“Today is where we’re starting, it’s a really significant step in the right direction.”

The three vehicles were recently purchased by the National Transport Authority and will go into service next week on Bus Eireann’s route 105X, which runs between Dublin and Ratoath, County Meath.

The vehicles operate in a similar way to battery-electric buses, the primary difference being the addition of an on-board fuel cell and hydrogen storage tanks, which allow for longer journeys of up to 400 km.

A chemical reaction within the fuel cell converts hydrogen and oxygen from the air into electricity and water vapour.

The electricity is then stored in on-board batteries and utilised to propel the bus using electric traction motors, while the water vapour is expelled at the rear of the bus.

During braking, energy is recovered to top-up the batteries.

Bus Eireann chief executive Stephen Kent said it was a “proud day” for the company, as it seeks to halve its emissions by 2030.

“It is a momentous step forward, there’s only around 4,200 vehicles of hydrogen around there world, and these are the very first ones appearing in Ireland” he added.

While the buses are close to twice the price of diesel vehicles, it is hoped the 12-month pilot scheme will be able to identify savings in other areas.

Mr Kenny said: “There’s a lot to be learned and as you know, hydrogen doesn’t have any economies of scale yet, in terms of its production.

“So we’re at the very early stages. For sure, it’s more expensive at the moment than diesel.

“But it’s no different than where we were 100 years ago, when the internal combustion engine started.

“You needed to gather pace, build scale in the market.

“And that’s where it is, from our perspective.

“The fleet themselves are slightly more expensive.

“But the real test will be in the whole of life costings that will go into the bosses.

“That’s where we’ll discover where the savings are on overall fuel efficiency.

“Of course, we expect these bosses to last as long as every other boss, which has a 14 year life.

“So it’s the beginning of a journey.

“There’s a lot of people that you know, chasing the hydrogen as a next fuel technology and we’re delighted to be part of that

“But we are at the start of a journey, and we want to invest in this technology, test it out and then see.

“We would expect those costs to come down over the years as there’s more growth in the market.”

She added: “Thanks to Luas and Dart, already almost a quarter of all public transport journeys on the Transport For Ireland network are on zero emission vehicles, and the NTA is committed to an accelerated transition to a more sustainable bus fleet.

“These buses are just one part of the overall approach, and hydrogen is just one of the technologies that we are looking to in the drive to make public transport more sustainable.”