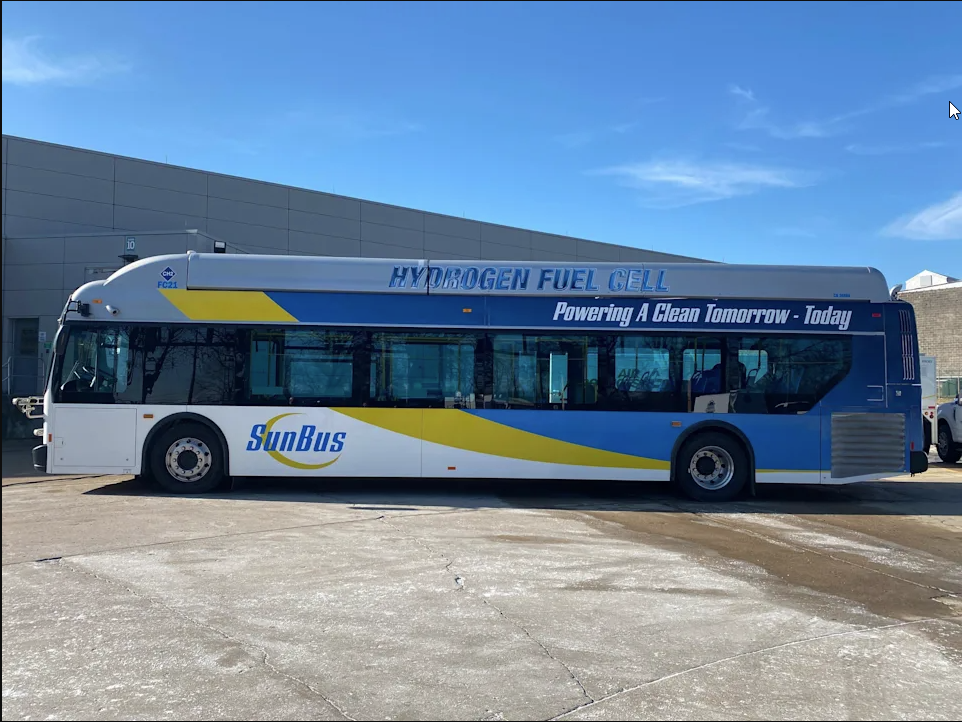 Commuters along Washington Street might have noticed a strange lineup on the road’s bus route last week: a regular IndyGo diesel bus followed by an empty green Red Line electric bus and a second empty, electric bus with unfamiliar branding.

Filled with water jugs to simulate the weight of passengers, the mystery bus used a different source to power its battery: hydrogen.

IndyGo gave the hydrogen fuel cell-powered bus a weeklong trial to see whether this alternative form of non-diesel transit might be a better option for Indianapolis’ bus fleet, which the agency plans to convert entirely to zero-emissions vehicles.

IndyGo is committed to operating its three planned rapid-transit routes with traditional electric buses, which use batteries charged on an exterior source. The question now is what kind of technology to pursue for the rest of its fleet, which runs on diesel.

In a hydrogen fuel cell, hydrogen and oxygen atoms react to produce electricity. In the bus used in IndyGo’s demo, loaned for free from SunLine Transit Agency in California, five tanks pump hydrogen into fuel cells to produce the electricity that charges the bus battery.

The process is far more efficient and energy-dense than a typical engine, allowing vehicles to extend their range, said John Sheffield, professor of engineering technology at Purdue University.

“It’s a compelling competitive advantage,” he said, particularly for heavy-duty trucks and city buses that drive more than 100 miles a day, which are more likely to make the up-front costs of the technology worthwhile.

Those costs are significantly higher than those for diesel or electric buses, because IndyGo would have to build a facility to produce hydrogen or ship it in from the limited number of hubs in the United States. The nation does not yet have the infrastructure needed to distribute hydrogen in a way that supports a widespread use of fuel cell vehicles, according to the Department of Energy.

“This has to make financial sense to us,” Black said.

But since the processes are so efficient, maintenance costs would stay low, and costs could break even in just a couple years for these kinds of vehicles, according to research from the Hydrogen Council, a global consortium of company executives committed to developing hydrogen as a clean energy source.

The mindset governing these analyses is of “total cost of ownership,” Sheffield said. For example, copy machines are a no-brainer purchase for offices because of the savings over the life of the machine.

“It’s just that mindset change,” Sheffield said. “We’ve done it in other things. We just haven’t done it in transportation yet.”

IndyGo is still reviewing the data from last week’s demo, Black said. Preliminarily, the results are positive for hydrogen. While IndyGo’s traditional electric buses typically travel about 200 miles on a single charge, the hydrogen bus traveled closer to the range of the diesel bus, which is 480 miles.The diesel buses drive an average of 300 miles a day.

The agency wants to explore other options in part because the electric buses delivered for the Red Line did not initially live up to expectations, and it’s not clear the technology will suffice for the rest of IndyGo’s fleet.

To improve the buses’ range, the electric bus manufacturer BYD (Build Your Dreams) installed an inductive charging station on the north end of the Red Line, where a bus can charge up for 10 to 15 minutes by sitting atop a metal plate in the ground. This year, BYD is installing a second inductive charging station on the south end of the Red Line, and plans to install a third on the future Purple Line.

Hydrogen fuel-cell technology has been used in public transit in European nations and some California transit agencies for about two decades. In the Midwest, Ohio’s Stark Area Regional Transit Authority and Illinois’ Champaign-Urbana Mass Transit District have started transitioning their fleets to hydrogen power in recent years.

“This is an exploration journey we’re on to see what other technologies are out there that would allow us to achieve our goal in a way that makes sense,” Black said.