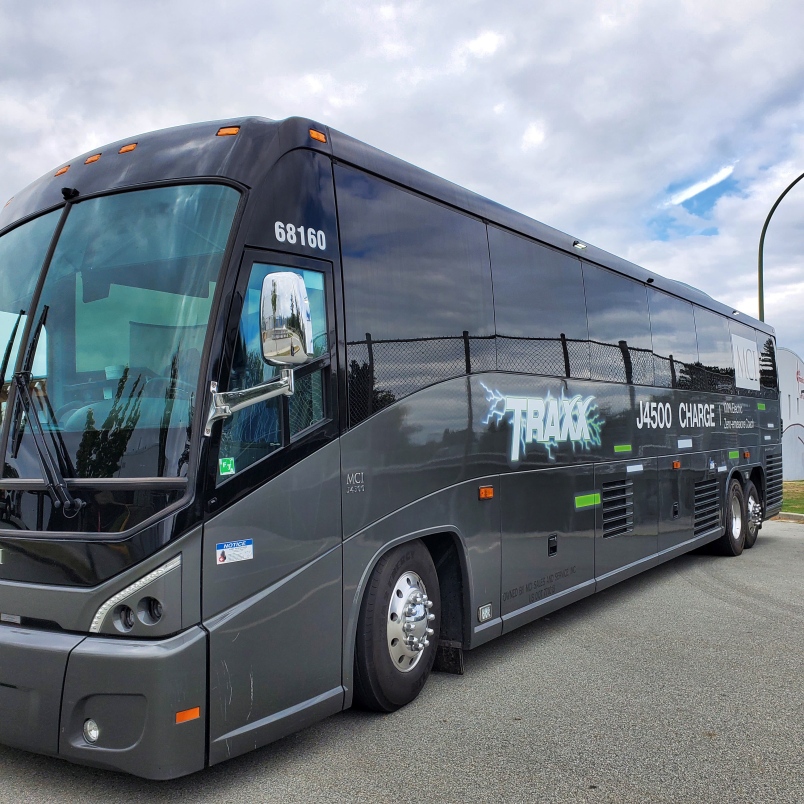 It was a ride into the record books.

On Monday afternoon TRAXX Coachlines, in partnership with Motor Coach Industries of Winnipeg, made history for both companies by successfully traversing the varying terrain between Kamloops and Vancouver in a full-sized, completely electric motorcoach bus.

The 261-kilometre (162-mile) trip between Kamloops — where TRAXX has an office — and Delta included cresting 1,444 metres (4,738 feet) of mountainous terrain along the Coquihalla Highway.

Documentation of the completion of the trip will be submitted to the Guinness World Records for possible inclusion under the category of “longest and highest voyage by an electric motorcoach in North America.”

After departing Kamloops, the 45-foot, MCI J4500 Charge coach, carrying a small group of employees from both companies, travelled along the Coquihalla.

The vehicle, MCI stated, was “engineered for rugged reliability on all roadway surfaces” and “designed to torque up fast and power through even the steepest road grades.”

Thus, the Coquihalla, complete with both steep inclines and declines, seemed like a perfect route for the test.

While representatives from MCI seemed confident the bus could complete its task, the results seemed to be surprising, nonetheless.

For the trip to be considered a success, representatives explained, the J4500 Charge would have to reach Hope — 164 kilometres (102 miles) from Kamloops — with at least 45 per cent battery power remaining in supply.

Thanks in large part to the technology’s regenerative braking system, which helps recover battery power as the vehicle goes downhill, the motorcoach reached and passed Hope with approximately 60 per cent power in reserve.

The Kamloops to Delta trip took about three hours and 45 minutes, with the 52 seats about one-third full.

The motorcoach world record attempt is not to be confused with a 2017 record set by an electric bus in Indiana. That record — 1,773 kilometres (1,102 miles) — on a single charge, involved a 40-foot transit-style bus designed by California company Proterra.

In addition to being an environmentally friendly vehicle, which produces zero carbon emissions, the J4500 is also whisper-quiet, both inside and out, even while quickly and smoothly accelerating up hill.

During the trip, which produces almost no noise pollution on the outside, guests inside the cabin only noticed the slight road noise and vibration from travel.

What this equated to for those onboard was a more relaxing experience when compared to traditional diesel-engine coaches, which produce considerable noise and noticeable shaking in the cabin when accelerating or braking.

Inside, the seats adorning the cabin are plush and comfortable, each equipped with its own three-point seatbelt for added safety and six ceiling-mounted LED screens for informational videos or entertainment.

Overhead, each seat has access to basic air-condition controls and lights, with air conditioning power plugs being found closer to the floor, allowing guests to keep charged and connected, adding to the feel of a luxury ride.

With this test now complete and considered a resounding success, what’s next for TRAXX and MCI?

Speaking with Kamloops This Week, Cox said TRAXX will be reviewing the results of the voyage with MCI (which had been monitoring the progress from on the bus as well as from a remote location) to analyze the data.

While Cox was obviously pleased with the results of the trip, he explained that TRAXX was ever looking forward, exploring different types of green technology, including hydrogen fuel cells, in an effort to make the company more ecologically responsible and environmentally friendly.

Currently, he explained, the biggest hurdle the industry faces in implementing green technology is the cost.The typical price tag for a diesel-powered motorcoach is approximately CDN$600,000.

While the cost of a basic, fully electric coach, such as the J4500 Charge, is currently in the area of CDN$1.3 million.

While government rebates and credits are often available to consumers when they purchase electric vehicles, there are no such rebates, credits or incentives available to Canadian companies such as TRAXX Coachlines.