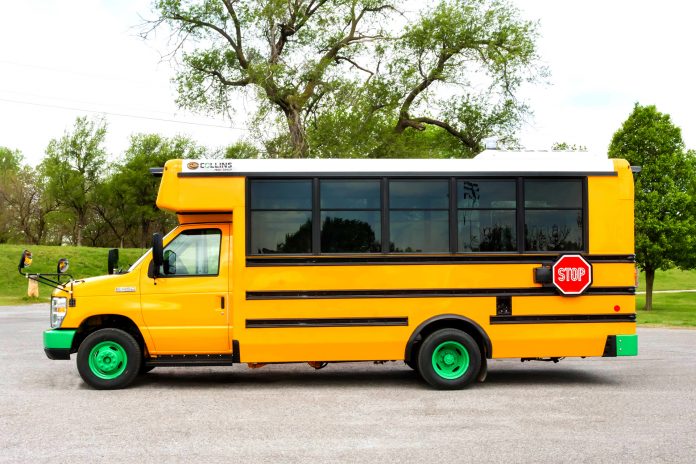 That is the hope of Lightning eMotors, which announced a two-year, $11 million deal on Tuesday to supply over 100 new electric drive systems to Type A school bus manufacturer Collins Bus Corporation. Lightning eMotors will also provide installation and charging infrastructure products and services, a company spokesperson told School Transportation News.

The company claims it could also bypass any current supply shortages by developing its own electric drive, which the Loveland, Colorado-based company first disclosed during an earnings call on Aug. 16. Kash Sethi, the company’s chief revenue officer, commented during Tuesday’s ACT EXPO trade show that the move relieves dependence on partners such as Ford and General Motors. The company continues to electrify the E-450 as well as GMC Savanna.

Additionally, Sethi told School Transportation News that Lighting eMotors is flexible enough to add its electric drive to a finished Collins school bus or send an electrified chassis to the Hutchinson, Kansas-based OEM for upfitting.

Another benefit to Collins Bus customers, Sethi shared, is a robust telematics system that provides weekly or monthly reports on energy consumption. Lightning eMotors also provides a fully electrified HVAC system, which Sethi added is easier and less expensive to accomplish on smaller vehicles. Still, he said weekly consumption reports indicate heating can account for nearly a quarter of battery draw in a Type A school bus.

One way to address increased energy needs over time is installing battery packs consisting of four rather than three Romeo batteries, Sethi said. Each Collins Bus will come standard with 125 kw hours of energy per full charge. Sethi added this “future-proofs” buses from battery depletion in later operating years.

Editor’s note: An original version of this article misstated the type of batteries currently used to power the new electric drive for Collins Bus.

Level II AC and DC fast charging come standard on all Collins Bus vehicles. Sethi explained that this provides school districts with reliability no matter the operation and duty cycle.

The company also provides Lightning Energy Solutions, a consulting service that helps customers with answers to questions such as how many chargers are needed and what contractors to use when installing infrastructure. Sethi said that the company also offers troubleshooting, which will make an electric transition easier for customers. And it makes his company’s job easier, as customers will expect Lighting eMotors to address and fix any issues being experienced

Meanwhile, a representative for Motiv Power Systems confirmed that the company continues to sell its electric chassis to Collins and remains “pleased with the relationship and resulting electric buses they build with our electric chassis.”

“Our relationship with Collins was never designed to be exclusive in either direction,” continued Jim Castelaz, founder and CTO of Motiv.