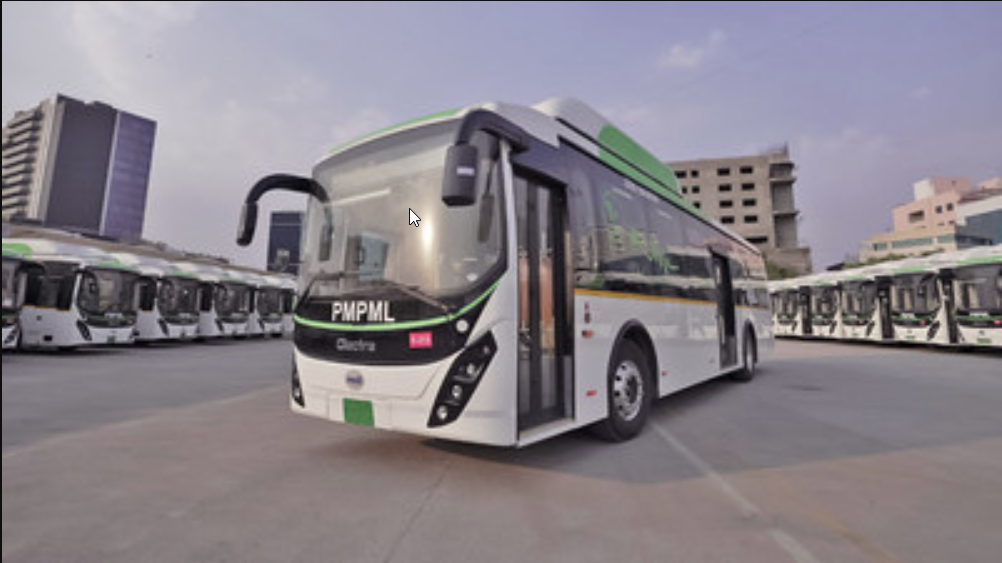 – Olectra’s fleet of 300 electric city buses in Pune is the largest compared to any city in India.

HYDERABAD and PUNE, India, March 7, 2022 /PRNewswire/ — Olectra Greentech Limited (OLECTRA) has added 150 more electric buses to its fleet in Pune. Olectra’s total fleet of 300 electric buses in Pune is the largest in the segment compared to any city in India. The company is confident of adding another 350 buses to Pune Mahanagar Parivahan Mahamandal Ltd (PMPML) in the next few months. Olectra is operating electric buses in Mumbai and Nagpur in Maharastra and clocked over three crore kilometres as on  January 31, 2022.

The company has already delivered over 600 electric buses to various state transport undertakings (STUs) and covered more than five crore kilometres on Indian roads. Olectra is the first to introduce 7, 9, and 12-metre electric AC buses in India. Currently, it has an order for 1,523 electric buses from various STUs. It is planning to enter into an inter-city / inter-state private transport segment and staff transportation segment in private sector.  It is the only manufacturer of tarmac electric buses in airports.

With a growing demand for electric buses from STUs and the private sector, the company has planned a massive expansion. It acquired 150 acres from the Government of Telangana to establish a state-of-the-art, fully-automated robotic manufacturing plant. The Olectra plans to manufacture 10,000 buses per year with the expanded capacity. The company has major plans to expand its product line by launching trucks, LCVs, three-wheelers and other EV products.

Prime Minister Narendra Modi has dedicated a fleet of 150 electric buses of  Olectra in Pune for public transport. He also inaugurated a state-of-the-art electric bus depot and charging station in Baner during the programme.

The Prime Minister gave a call to the nation to encourage electric mobility to overcome the troubles of diesel price hikes and to reduce carbon emissions. He unveiled a vision for the growing cities of the country where the government is committed to providing an enhanced opportunity for  greener transport, electric buses, electric cars and electric two wheelers.

Olectra is the pioneer and a leading player in electric mobility in India. Olectra is also successfully operating the electric bus fleet in Surat, Mumbai, Pune, Silvassa, Goa, Nagpur,Hyderabad and Dehradun.

With the addition of new 150 electric buses, the citizens of Pune city will experience noiseless commute. These buses will significantly contribute to the reduction in CO2 emissions in the city. Urban public transportation is one of the primary causes of pollution across the world. The buses run with electricity as their fuel, and are zero-emission vehicles. They have several safety features, integrated into them.

As the response from the commuters in multiple cities is very encouraging, many transport organisations are willing to increase the fleet of electric buses.

While announcing the deployment of the buses, Olectra Greentech Limited Chairman and Managing Director Mr. K V Pradeep said, “Olectra is proud to add another 150 electric buses to its fleet in Pune city to the current fleet of 150 buses. Our buses would now contribute to preserving the rich heritage of Pune city. Olectra is committed to its efforts in reducing pollution levels through zero noise pollution and minimising carbon emissions through an efficient electric public transport system. Our Electric buses have already proved their reliability and efficiency, as they have been successfully operated over 2 crore km in Pune alone.”

These 12-metre Air-Conditioned buses have a seating capacity of 33+Driver. The electronically controlled air suspension ensures a comfortable ride. The buses are equipped with CCTV cameras to ensure the safety of the commuters. An emergency button and USB Sockets for each seat have been provided. The lithium-ion (Li-ion) battery installed in the bus enables it to travel around 200 km on a single charge, based on traffic and passenger load conditions. The technologically-advanced bus has a regenerative braking system which allows the bus to recover part of the kinetic energy lost in braking. The high-power AC & DC charging system enables the battery to recharge in 3-4 hours fully.

About Olectra Greentech Limited (A Group Company of MEIL)

Established in 2000, Olectra Greentech Limited (a public listed company) – part of MEIL Group, pioneered the introduction of electric buses in India in 2015. It is also the largest manufacturer in India for Silicone Rubber/Composite Insulators for power transmission and distribution networks.