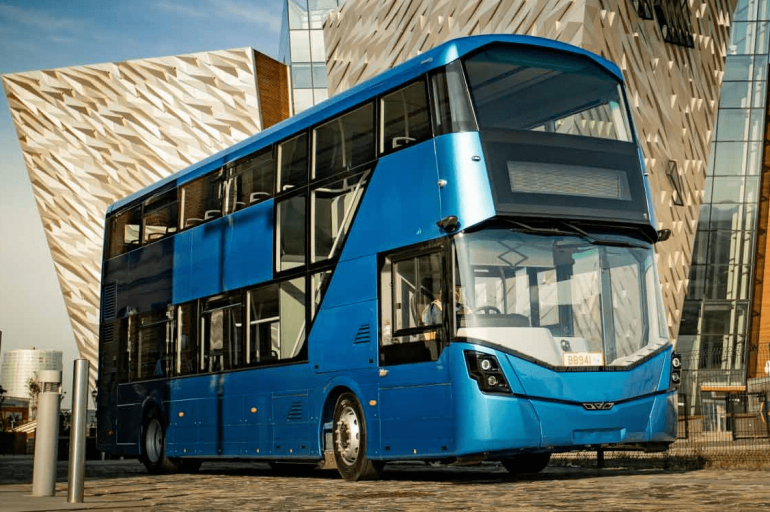 The Northern Ireland manufacturer claims that the Streetdeck electroliner model combines optimal power with class-leading quick charge. “Our electric buses spend more time in operation than any other,” assures CEO

Rightbus, a Northern Ireland bus manufacturer, is mainly known for its hydrogen buses. In the alternative propulsion sector, the company is still known for its double-decker hydroliner FCEV bus. Units are in use in Aberdeen, London, Belfast and Dublin. The British capital recently received 20 double-decker rightbus H2 buses, which will be used on Route 7 between East Acton and Oxford Circus.

The batteries of the 95-passenger Streetdeck Electroliner, including 74 seats, are mounted on the bottom and back of the bus.

The battery pack is available in two configurations: 340 kW and 454 kW. The manufacturer claims that the latest package offers a range of up to 200 miles (approximately 320 km).

Another feature of the new electric model called Rightbus ized is the faster charging capabilities of the new buses. These can be charged up to 300 kW via CCS (integrated charging system) or up to 420 kW via pantograph.

CCS is another type of connector used for fast charging, and its use is growing in popularity – especially in Europe and the United States.

For charging, the Northern Ireland company only provides values ​​for the 150 kW charge: therefore, the charging process takes two and a half hours for the 340 kW bus variant and three hours for the 454 kW variant.

The most relevant feature of the AV133 rear axle for the lower end chassis is the aluminum spring holder, which makes the axle lighter which weighs 45 kg. The RL82 EC suspension is designed to receive axle loads up to 8.2 tons.

Streetdeck Electroliner offers an option for one or two door models.

Wrightbus CEO Boota Atwal explains the concept of the electric model launched by the company: “We do not overload the bus with high batteries, so we can say that it has more power or range; Instead, our goal is to place a more efficient vehicle on the road, so we combine optimal power with the fast charge that drives the class, which means our electric buses spend more time in operation than any other. ”