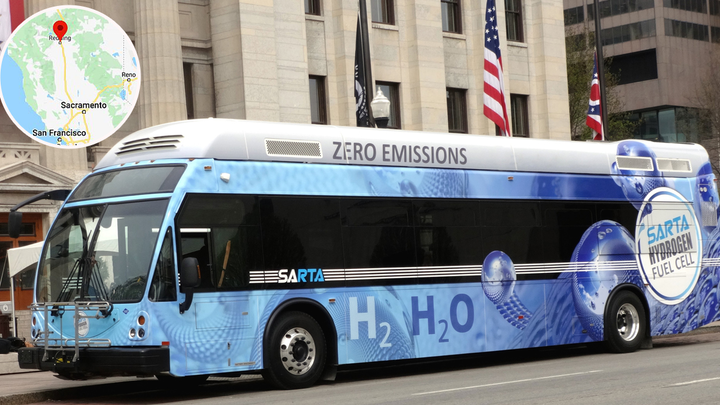 SARTA resumed the tour with one of its hydrogen fuel cell-powered (HFC) buses with a week-long, eight-stop swing through California.

The BaB program is supported by ElDorado National California (ENC®). The hydrogen fueled ENC AXESS FC® never needs gas and only water is emitted from the tailpipe. It is also federally certified for three-point seat belts. The company, which built the SARTA bus being used on the BaB tour, will provide free technical support and fuel for the vehicle during the California swing. The tour is also being underwritten by Creative Bus Sales, BAE Systems which manufactures the vehicle’s propulsion system, and Ballard Power Systems, the firm that produces the bus’s hydrogen fuel cell.

SARTA CEO Kirt Conrad created Borrow a Bus to raise awareness about and generate support for the zero-emission technology.

“Most Americans, including policy-makers and the media, don’t know what fuel cells are or how they work,” Conrad said. “Giving people across the country the opportunity to see, learn about and operate a hydrogen fuel-cell bus on their roads and highways is the most effective way to demonstrate that HFCs have the potential to totally transform the way vehicles are powered in the U.S. and around the world.”

Along with looking under the hood and kicking the tires, transit managers will be able to review hundreds of thousands of miles worth of real-world data SARTA has collected while operating HFC buses on the streets of Stark County in Canton, Ohio, in a multitude of various weather conditions over the past 10 years.

“That data provides clear and convincing evidence that HFC buses deliver much greater range than battery electrics, are both more reliable and affordable to operate, remove tons of pollutants from the air and, perhaps most importantly from an operational standpoint, take only minutes to refuel,” Conrad continued. “All of which leads to the obvious conclusion that hydrogen is the best alternative fuel solution available in the transportation space.”

“Borrow a Bus ensures that fuel cells will be a prominent part of the renewable energy conversation as the drive to electrify transportation in the U.S. and the world gains momentum,” Conrad said. “To date, that conversation has been dominated by the plug-in electric sector. But as more and more people get a close-up look at HFCs and begin comparing performance data, hydrogen is gaining traction because the vehicles offer the efficiency, range, operational capabilities, and rider experience transit professionals are seeking as they strive to achieve their zero-emission goals.”