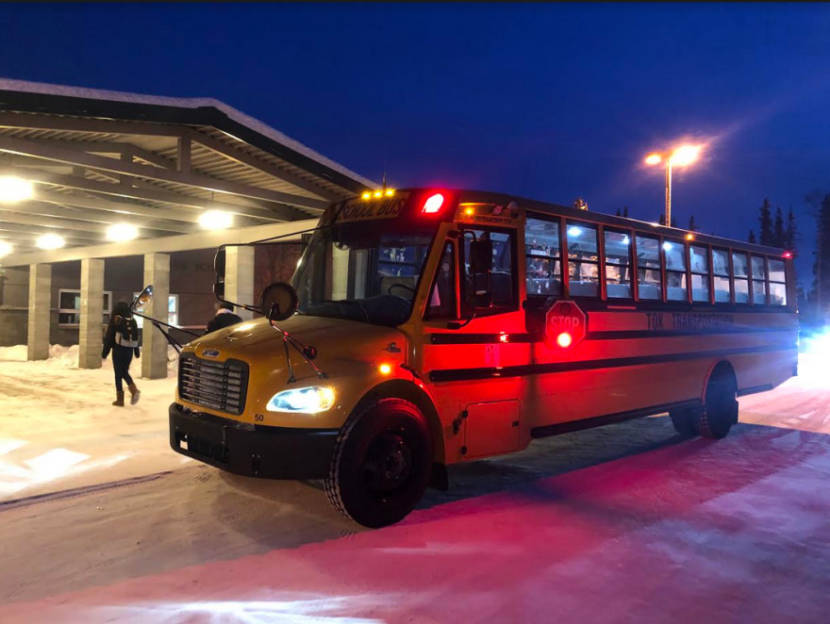 Alaska’s first and so far only electric-powered school bus is performing well in its second year of service for the Tok-based Alaska Gateway School District. And with temperatures in the eastern Interior forecast to drop overnight to 20 below or colder next week, the company that owns the bus will again be able to test its ability to operate in the frigid Alaskan winter.

Tok Transportation co-owner Gerald “Stretch” Blackard says the bus ran its routes every day that classes were in session last year, including when the temperature dropped to nearly 40 below.

“What we found out is the bus heated well,” he said. “It kept the interior at normal temperature.”

Normal in the sense that the inside of the bus must be kept at a minimum of 45 degrees Fahrenheit, according to state regulations. The district requires the kids to dress warmly, so 45 feels comfortable.

But Blackard says keeping the bus that warm at 30 or 40 below zero drains its batteries more quickly than it would on warmer days.

“Even with a little bit of insulation on the batteries and kind of covering up the engine compartment, to try to hold in as much heat as we could, we were still using more energy to heat the bus than we were to drive the bus,” he said.

Blackard says warming the bus during its runs on those cold days drained a little over half of the battery’s charge, whereas driving the bus used a bit more than 40%. He expresses that so-called efficiency in terms similar to that of a conventionally powered vehicle’s fuel economy.

Blackhard says his solar panels generate only half the electricity needed to charge the bus’s batteries, so he has to buy the rest from the local utility. He says he’s looking into adding a battery bank to the solar-power system to fully charge the bus, without the grid backup.

“But that’s going to have to come at a later time, because that’s another cost that I don’t have the money to put for right now,” he said.

Blackard paid $50,000 last year to buy the $400,000 bus. The remaining amount came from a program administered by the Alaska Energy Authority.

He says he’s been sharing the data he’s collected with the AEA, as well as the University of Alaska Fairbanks’s Alaska Center for Energy and Power. Also, Proterra, the battery manufacturer, and Thomas, the bus’s North Carolina-based manufacturer.

“I’m in contact with them often,” he said, referring to Thomas. “and they’re always curious to see how things are going and making sure that it’s working properly.”

Blackard says he’s also sharing his data with nonprofits operated by Alaskans who share his enthusiasm for electric vehicles and renewable energy.