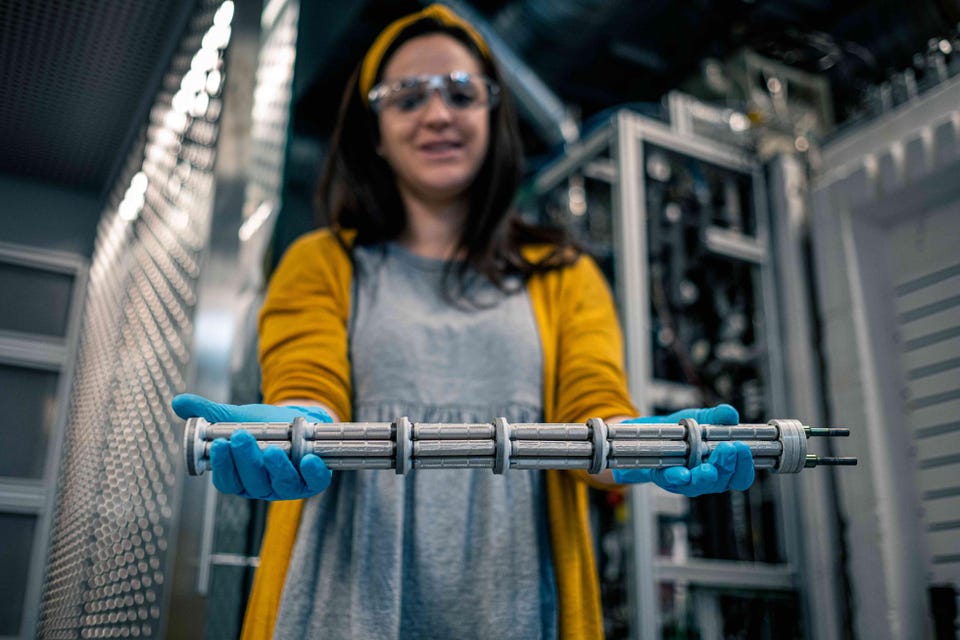 Hydrogen, the universe’s most abundant element, has been an elusive clean fuel option for decades, bedeviled by the difficulties of generating the energy-packed element in an efficient, low-cost method and without carbon emissions. CoorsTek, a low-key giant in the world of engineered ceramics, says it has a highly efficient new method to make hydrogen fuel that works with existing energy infrastructure.

The Golden, Colorado-based company, led by the great-grandchildren of brewery founder Adolph Coors, thinks its approach is an energy-efficient alternative to the conventional way hydrogen is made for refineries and chemical and food-processing plants—steam reforming of natural gas (CH4), co-CEO Timothy Coors tells Forbes. The technology, which uses a nickel-based glass-ceramic proton membrane to generate the fuel, is also more efficient than electrolysis, a competing approach to making “green” hydrogen by splitting water (H2O) with electricity from renewable energy sources, Coors says.

Hydrogen generated from steam reformation and electrolysis, under the best of circumstances, have energy efficiency in the mid-70% range, but “we’ve got a cell that’s operating at in the upper 80% to low 90% overall efficiency, with very high purity hydrogen coming out on one side and high purity carbon dioxide on the other,” Coors says. “The unique part about our technology is that you’re actually using less natural gas in creating a very pure stream of hydrogen that is already pressurized coming out of our system.”

CoorsTek detailed its approach, developed with a global team of researchers, in the journal Science. It wants to commercialize the technology in the next few years.

Already a key supplier of high-tech ceramic materials to the global automotive, semiconductor, defense and energy industries, CoorsTek is jumping into hydrogen at a time when engineering and technological improvements are making it more attractive as a carbon-free fuel to electrify heavy-duty trucks, trains, ships, aircraft and other vehicles too large or heavy for battery packs. When used with fuel cells, hydrogen creates electricity for propulsion without any tailpipe emissions other than water vapor. If the company’s approach works, it would overcome one key drawback for hydrogen: It takes far more energy to make the fuel than it returns.

Though Tesla CEO Elon Musk has been a high-profile hydrogen critic for many years, the fuel is increasingly seen as a way for carbon-intensive industries such as steelmaking and oil refining to reduce their overall pollution footprint. To do that, however, the hydrogen must be generated in ways that produce very little or no carbon dioxide. Improvements in fuel cells also make hydrogen a compelling option for heavy-duty trucks, with companies including Toyota, Hino, General Motors, Cummins, Volvo, Daimler, Navistar, Nikola and Hyzon preparing to compete in that space. The companies note that hydrogen powertrains aren’t as heavy as the massive battery packs needed for a semi-truck to travel hundreds of miles and that such vehicles can be refueled in about the same time as it takes for a diesel truck.

The main criticism of hydrogen as a fuel for vehicles is its inherent inefficiency as a source of electric power. The amount of energy required to make it, compress or liquefy it and transport it to where it will be used is greater than what’s left to power a vehicle. The cost of materials needed to make fuel cells, including precious metals like platinum, that turn hydrogen into electric power, and their long-term durability have also been stumbling blocks in the past, though fuel cell developers say those issues are being addressed by advances in materials used. And while batteries are a more efficient option for storing energy in vehicles or on the grid, they are less well-suited for the heaviest types of vehicles or very large-scale power storage. They also require greater amounts of high-cost raw materials, including lithium, nickel, cobalt and manganese.

The 112-year-old CoorsTek traces its roots back to a glassworks Adolph Coors started in 1887 that made beer bottles for his brewery. These days it’s wholly owned by the Coors family and not part of the Molson Coors Beverage Co., the public entity created with the 2005 merger of the Adolph Coors Co. and Canada’s Molson. CoorsTek has thrived as a private company, with annual revenues well over $1 billion, according to Timothy Coors, who leads the company with cousins Jonathan and Michael Coors. “We are certainly profitable and our shareholders appreciate that—even though they’re private shareholders,” he said, without elaborating.

(For more on CoorsTek, see: Inside The Coors Family’s Secretive Ceramics Business Worth Billions)

The company’s global operations provide a broad range of engineered ceramics for everything from makers of semiconductors, auto parts, electric vehicle and battery components to medical joint replacements and even military body armor and armor for aircraft and vehicles.

“We’ve broken down our markets currently within CoorsTek as this idea of areas that we want to grow aggressively in, areas that we’re going to grow optimistically and then those that we’re going to grow profitably,” Timothy Coors said. Hydrogen, like the company’s efforts on batteries and electric vehicle components, falls into that optimistic category. “Things that are not mainstream just yet, but we’re optimistic that we have technology that can actually help accelerate,” he said.

“We have this massive natural gas infrastructure already. So rather than create a new grid, we see an advantage in a system that can work with the one we have.”Timothy Coors, CoorsTek Co-CEO

In the case of its new ceramic proton membranes to make hydrogen, natural gas (or ammonia or biogas) would flow through CoorsTek’s cylindrical “generators” to create the fuel for use on-site, most likely installed in existing industrial facilities already using large amounts of the gas. Timothy Coors also envisions the proton ceramic membranes being used at fuel stations fed by natural gas to help accelerate the creation of a hydrogen fueling network for trucks and other types of vehicles. The ability to make fuel on-site also would reduce overall energy requirements for hydrogen if it has to be trucked to where it will be used.

“Energy efficiency is key to the future of hydrogen as a clean fuel,” Irene Yuste, a chemical engineer at CoorsTek Membrane Sciences in Oslo and one of the authors of the company’s Science article. “Our work shows that protonic membranes can make hydrogen from ammonia, natural gas and biogas so efficiently that hydrogen fuel cell cars will have a lower carbon footprint than electric cars charged from the electricity grid.”

The membrane also creates a filtered stream of carbon dioxide that can be easily captured and either sequestered or used for other industrial processes, Coors said. Making hydrogen from electrolysis is appealing because there is no carbon dioxide to contend with, though aside from its relative inefficiency it may only be a good option in places where both renewable electricity and water are abundant. (The end product is known as green hydrogen, given the absence of CO2, while the approach taken by CoorsTek is “blue” hydrogen–made from fossil fuels with a component to capture the carbon.)

“Hydrogen generation through electrolysis has a place in this world, but we know how much energy it takes theoretically to go into splitting the hydrogen from the oxygen,” Timothy Coors said. “The whole premise is that we can take extra energy when the sun is shining or the wind is blowing, convert that into something that we can store. Whether that’s a battery or we store it in a form of hydrogen electrolysis is going to play a role.”

Rather than fully redesigning the existing energy infrastructure, CoorsTek wants to take advantage of it. “We have this massive natural gas infrastructure already,” he said. “So rather than create a new grid, we see an advantage in a system that can work with the one we have.”