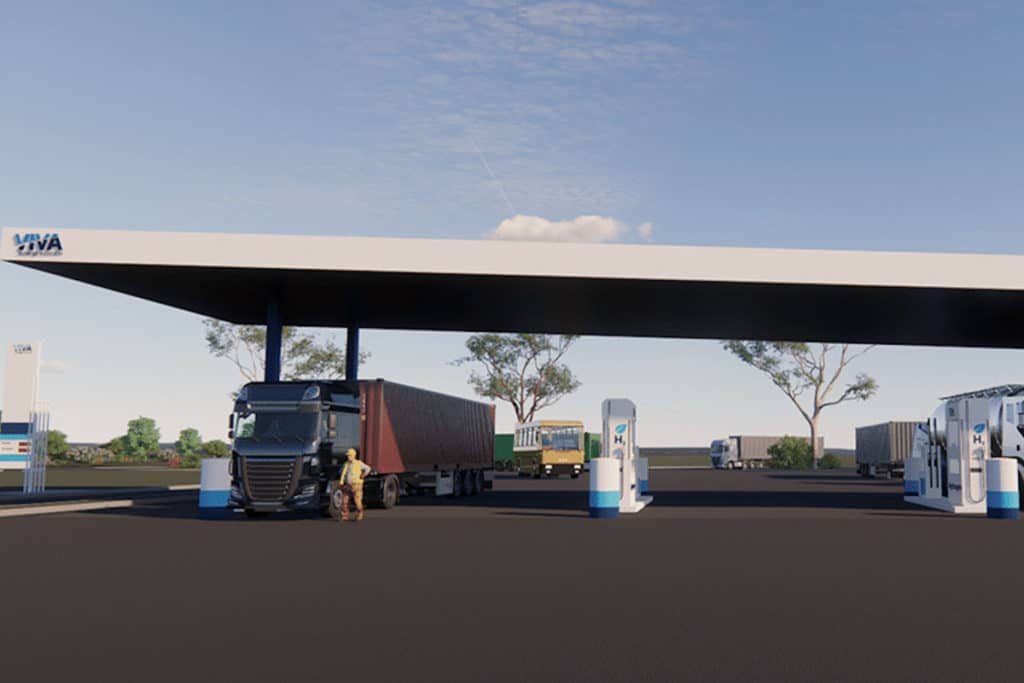 The $43.3m project will be built opposite Viva Energy’s petroleum refinery and incorporate a 2 MW electrolyser along with hydrogen compression, storage and dispensing infrastructure. The service station will also include 150 kW electric vehicle (EV) charging facilities.

The Australian Renewable Energy Agency (ARENA) announced today it would be chipping in $22.8m toward the cost.

ARENA’s funding will go towards both the renewable hydrogen and EV infrastructure, as well as to subsidise the purchase and operations of 15 hydrogen FCEVs to help fast-track FCEV uptake. ARENA funding for the FCEVs will be paid upon the delivery of the vehicles.

Viva Energy’s project will allow for the procurement, delivery and operation of the hydrogen FCEVs to utilise renewable hydrogen from the New Energies Service Station. Over time, Viva Energy hopes to add traditional diesel refuelling on-site to allow drivers to witness FCEV charging.

It is hoped the servo will be up and running by the end of 2023.

All vehicles will be purchased and owned by project partners. Toll Group, ComfortDelGro Corporation Australia, Cleanaway and Barwon Water have committed to purchasing hydrogen FCEVs for their fleets which include prime movers, wastewater and municipal waste collection vehicles and buses.

Viva Energy said locating the project adjacent to its Geelong refinery provides a number of benefits to the project, including a high level of visibility, due to its proximity to major arterial roads and being within an existing industrial area, as well as access to high voltage infrastructure and access to recycled water from the nearby Barwon Water recycling plant for production of hydrogen.

The experiences of Viva Energy and fleet vehicles using the renewable hydrogen produced onsite for refuelling will provide valuable insights into the operation of different types of hydrogen FCEV heavy vehicles, a statement added.

ARENA CEO Darren Miller said this project will be a key opportunity for early uptake of commercially viable hydrogen and a service station model that could be replicated across Australia as the price of electrolyser technology drops.

Viva Energy CEO Scott Wyatt said the ARENA funding has opened the door for Viva Energy to work with long-term customers to demonstrate the important role that hydrogen will play in the future of transportation in Australia.

“This project puts hydrogen-powered vehicles on the road to prove their value in day-to-day commercial operations while reducing the carbon footprint of the heavy vehicle transport we rely on every day,” said Wyatt.

ARENA is also supporting Ark Energy to deploy five hydrogen-powered prime movers operating between its zinc refinery and the Port of Townsville.