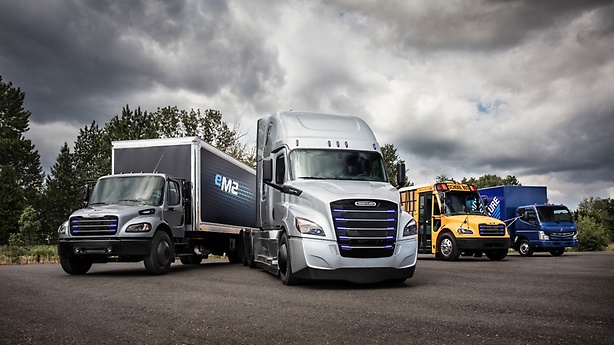 In a recent interview with the media, Daimler Truck CEO Martin Daum talked about various aspects the electric vehicle industry should be focusing on. He further talked about the various factors that played an important role in emphasizing the cost of electric trucks.

As efforts to have zero carbon emissions are being pushed, the need to talk about developments has also become crucial. While the competition is getting tough, the hurdles are also getting tougher. Daum said in a statement, “The first truth is, in heavy-duty commercial vehicles you need such a huge amount of energy, meaning you need such large batteries, that such a truck always will cost significantly more than a combustion engine powered truck.”

Further added that the savings will come when the cost of carbon emissions rises, resulting in to drop in renewable energy price. As the situation turns around, there might be a cost parity, or else in other situations the road transportation might become expensive. Regardless of the challenges of prices, the automotive industry has to go to zero-emission transportation as part of “climate goals”. Vehicles with the zero-emissions are predicted to account for up to 60% of sales by 2030.

Meanwhile, heavy-duty trucks have their own challenges compared to regular vehicles. Long-haul trucking was described in the International Energy Agency’s Global EV Outlook for 2021. It described that trucking needs  “advanced technologies for high power charging and/or large batteries.”

Daimler Trucks will focus on zero-emission technology, where their competition will be with Geely and Tesla. Both companies have been working on the development of electric trucks. Daum later talked about Daimler’s future, stating “We deliver, we don’t announce … we just launched our all-electric heavy-duty truck in Europe, the eActros, a couple of weeks ago. But that was a launch, not an announcement.”

Additionally, Daum adds that to know how their trucks stack up to others, they first need to see the other trucks which are or will be developed. Interestingly it is said that Daimler is also working on hydrogen fuel-powered trucks. Also working to reach the target network of 150 hydrogen refueling stations for the 5,000 heavy-duty trucks to be built by 2030. Daum also talked about the debate between hydrogen vehicles and electric vehicles. For Daimler, it makes sense that they are working on both hydrogen and electric vehicles. However adds, “In general, you can say: If you go to city delivery where you need lower amounts of energy in there, you can charge overnight in a depot, then it’s certainly battery electric. But the moment you’re on the road, the moment you go from Stockholm to Barcelona … in my opinion, you need something which you can transport better and where you can refuel better and that is ultimately H2.” Finally says that it is too risky for their company to go with just one technology.