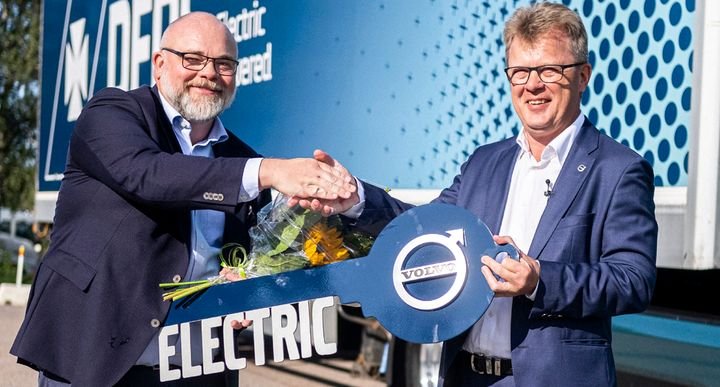 Deliveries will start in the fourth quarter and continue throughout 2023. The trucks will be used for short- and long-haul transport in the DFDS logistics system in Europe.

“At DFDS, we’re determined to play our part in reducing CO2 emissions and creating a sustainable supply chain,” said Niklas Andersson, head of the logistics division at DFDS. “We know how important electrification is in the jour-ney to reach our CO2 targets, and I hope we can inspire others as we move forward in this vital transition.”

The vehicles can be charged both via overnight depot charging and via high-power DC fast charging en route. DFDS has chosen a financing solution provided by Volvo Financial Services.

Volvo noted that the electrification trend in the heavy truck market is accelerating. In Europe, a few hundred trucks above 16 tons have been registered so far this year. Of these, approximately 40% are Volvo electric trucks.

New Briefs from Around the World

Mercedes e-truck: The first series-production electric Mercedes-Benz eActros rolled off the production line in Daimler’s new Future Truck Center in Germany. Series production of the eEconic, developed for municipal use, is scheduled to start in the second half of 2022. The battery-electric eActros LongHaul for long-distance transport is scheduled to be ready for series production in 2024. “Today’s start of the eActros series production is a very solid proof that we’re serious about zero-emission transport,” said Karin Rådström, the Daimler Truck board member responsible for Mercedes-Benz Trucks.

Hyzon fuel-cell-truck production: Hyzon Motors’ largest production site, which opened earlier this year with a capacity of up to 500 trucks per year, said it expects to increase capacity to up to 1,000 trucks per year in 2022. This will be achieved through operational updates and the addition of a second shift. Located in Winschoten, the Netherlands, it will be the European hub for vehicle assembly as well as the development of new vehicle technology such as hydrogen storage systems.

British-designed electric truck: The new Tevva Truck is the first British-designed 7.5-tonne electric truck intended for mass production, according to the company. It offers a range of up to 250 km in fully electric form or up to 500 km with its range extender technology REX, which has now been upgraded to use hydrogen fuel cells.