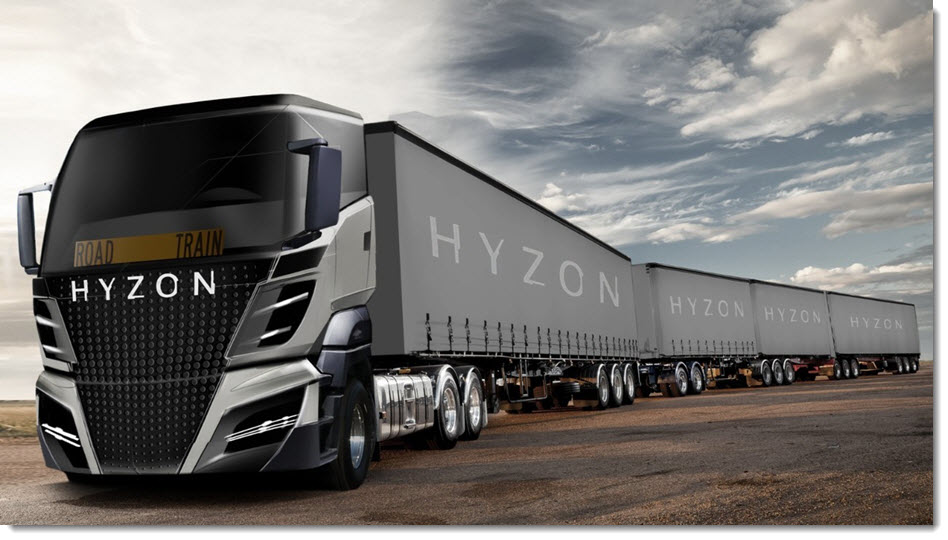 Hydrogen fuel cell electric vehicle (FCEV) maker Hyzon has struck a partnership deal with the RACV, the Royal Automobile Club of Victoria, which will involve only the U.S.-based company setting up shop in Melbourne, but will also see towing company Nationwide Group, a subsidiary of RACV, deploy Hyzon’s hydrogen models – a first for Australia.

While Hyzon is headquartered in Rochester, New York, its CEO and co-founder Craig Knight is Australian, which has presumably led the company to pay attention to the Australian FCEV market which is routinely overlooked.

In conjunction with the RACV, Hyzon will develop a purpose-built facility in the Melbourne suburb of Noble Park which will include corporate offices, a showroom, assembly warehousing and workshops.The move, Hyzon says, is expected to generate over a 100 localised engineering and manufacturing jobs by 2025, with “hundreds more indirect jobs expected through the supply chain.”

The news comes not long after H2X, Australia’s homegrown hydrogen vehicle manufacturer, announced it would set up manufacturing capacity for its hydrogen fuel cells and equipment in Victoria’s Gippsland region.

Both the companies’ Australian chief executives, Craig Knight from Hyzon and Brendon Norman from H2X, have expressed ambitions of returning manufacturing capabilities to Australia through building hydrogen vehicle capacity here. Unlike H2X though, Hyzon is specifically focussing on manufacturing commercial heavy vehicles.

RACV-owned towing company Nationwide Group is set to receive three vehicles from Hyzon, including two “locally manufactured” HyMax TT7 tilt-tray trucks and one of Hyzon’s fully imported HyMax prime mover trucks. The vehicles are scheduled for delivery by the end of the year.

“Nationwide [Group] is keen to assess the performance of these vehicles in a real-world test for towing and transport,” Nationwide’s CEO, Michael Stephenson, said.

Managing Director for Hyzon Motors in Australia and New Zealand, John Edgley, described the company’s partnership with RACV as an “exciting prospect” for its business development in the region.

“We are focused on generating new jobs, new manufacturing and technology facilities, and a fundamentally new industry in Australia and New Zealand, that will underpin a sustainable future for the region,” Edgley said.

“With governments across Australia and New Zealand shifting their focus towards hydrogen as a cost-competitive and zero-emission fuel source, Hyzon stands ready to support and partner on key projects and initiatives.”

Hyzon was born of the Singapore-based company Horizon Fuel Cell Technologies, which was founded in 2003 and specialises in hydrogen fuel cells. Australian Craig Knight was a founding shareholder in Horizon, holding position of CEO in the company from 2019 to 2020, before becoming the co-founder and CEO of its spinoff Hyzon.

In short, Hyzon is a response to the reluctance of the auto industry to move away from fossil fuels and seeks sidestep them by offering commercial FCEVs to the market directly using the proprietary hydrogen fuel cell technology from Horizon.

In July 2021, Hyzon listed on the Nasdaq, America’s stock exchange, as it grows internationally. While it primarily services the U.S, China and Europe, it has had success in Australia too with the company scheduled to deliver hydrogen powered coaches to Fortescue Metal Group for its Western Australian operations in 2022, as well as its prime mover trucks to Coregas in New South Wales and TR Group in New Zealand.

It will also deliver five fuel cell-powered heavy-duty trucks to Ark Energy Corporation, the Australian subsidiary of the world’s largest zinc, lead, and silver producer, Korea Zinc, this year. Finally, it has an agreement in place with garbage truck company Superior Pak which will see its HyMax GSL garbage trucks used in Queensland, part of an agreement which sprouted from a hydrogen innovation hub in Bundaberg.

Hydrogen-powered vehicles, or FCEVs, have sparked heated debate in Australia and around the world with many doubtful of their prospects against the prospering and already established pure electric vehicle (EV) market.

That being said, there is more optimism for the technology when it comes to heavy vehicles, like trucks, buses and other commercial-use locomotives. This is the sole focus of Hyzon, though not of its main Australian competitor, H2X.

In January 2021, Hyzon announced it had signed an agreement with Pure Hydrogen which would see the pair collaborate to develop a network of hydrogen refuelling stations across the nation. Since then, Pure Hydrogen has acquired a significant 24% stake in H2X Global.

It is also worth noting Pure Hydrogen is a somewhat misleading name given the company owns three gas projects, including the Windorah Gas Project in the Cooper Basin, one of Australia’s most prolific onshore petroleum basins. Such fossil fuel allegiances have of course only exacerbated the debate around hydrogen vehicles, which brand themselves as “zero emissions vehicles” which is only the case if they are refuelled with 100% green renewable hydrogen. Something which is certainly not a given.