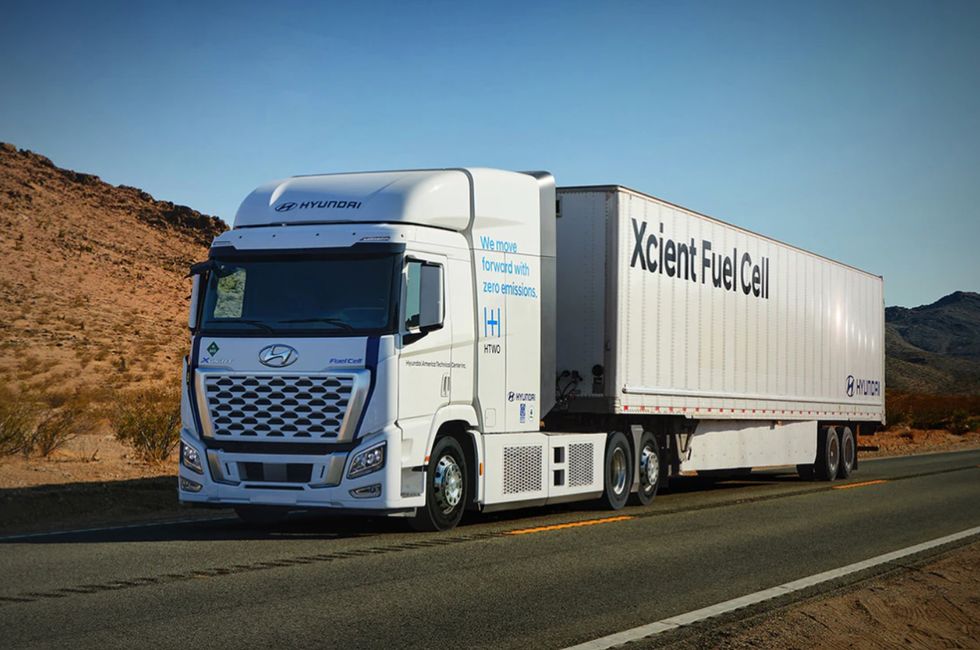 A fleet of Xcient trucks is on its way to California, but the state will still need more hydrogen stations.

Hyundai is one of several automakers that have made a bet on hydrogen fuel cell powertrains, ranging from passenger cars to semi trucks, and this year Hyundai will bring the latter to California in a trial run of sorts. The South Korean automaker will send its Xcient trucks across the Pacific, which the company bills as the world’s first mass-produced, heavy duty hydrogen fuel cell trucks.

Fresh off a debut in Switzerland in 2020, the Class 8 Xcient will head to our shores offering a maximum 500-mile range and a gross combination weight of more than 37 tons, or more than 82,000 pounds. The trucks will be used by the automaker’s public and private partners to operate the within the state. Two trucks will arrive this year as part of an EPA-funded pilot effort, with an additional 30 arriving in early 2023.

The second, larger effort will be funded by grants from the California Energy Commission (CEC) and the California Air Resources Board (CARB), in addition to funds from the Bay Area Air Quality Management District and the Alameda County Transportation Commission. The consortium, led by Center for Transportation and the Environment (CTE), plans to build a a high-capacity hydrogen refueling station in Oakland, with enough fuel planned to support 50 trucks. It’s expected that the trucks themselves will serve similar routes from the ports to warehouses.

The effort itself is expected to largely mirror the types of hydrogen truck trials underway in Europe, with trucks using a hydrogen “corridor” of sorts between large port cities and manufacturing centers. This type of usage tests envisioned hydrogen fuel stations based in ports and tailored to large trucks, which then distribute cargo to companies in the region, with locations a few hundred miles away. This is why we’re seeing the effort take place in California, where hydrogen infrastructure is the most developed in the U.S., and where creating these hydrogen routes for trucks appears feasible in the long-term, or at least more feasible than elsewhere in the nation.

The bigger picture is that hydrogen fuel cell powertrains increasingly appear to be a more fruitful endeavor for Class 8 trucks rather than passenger cars. A number of automakers, including Hyundai, are still trying to make hydrogen FCVs happen for passenger vehicles, but the glacial pace of hydrogen infrastructure growth has made the efforts seem like a missed opportunity to have invested in EVs instead. Several truckmakers are now betting that large trucks owned by logistics companies, coupled with hydrogen corridors between port cities and industrial centers, will present a much more realistic opportunity for growing this zero-emission technology.

However, battery-electric semi trucks are not far behind, with several truckmakers in the process of commercial roll-outs of their own models, though they won’t be able to take advantage of passenger-car EV charging stations. So both types of trucks will effectively need their own infrastructure.

“We are proud to fund this hallmark deployment of 30 hydrogen fuel cell electric trucks and improve the air quality in Northern California,” said Hannon Rasool, Deputy Director of Fuels and Transportation Division at the California Energy Commission. “These investments will support zero-emission trucks and infrastructure development and deployment as part of the US market ecosystem. Public and private project partners have come together to take a big step forward in decarbonizing freight and goods movement, as part of CARB and CEC’s clean air initiatives.”