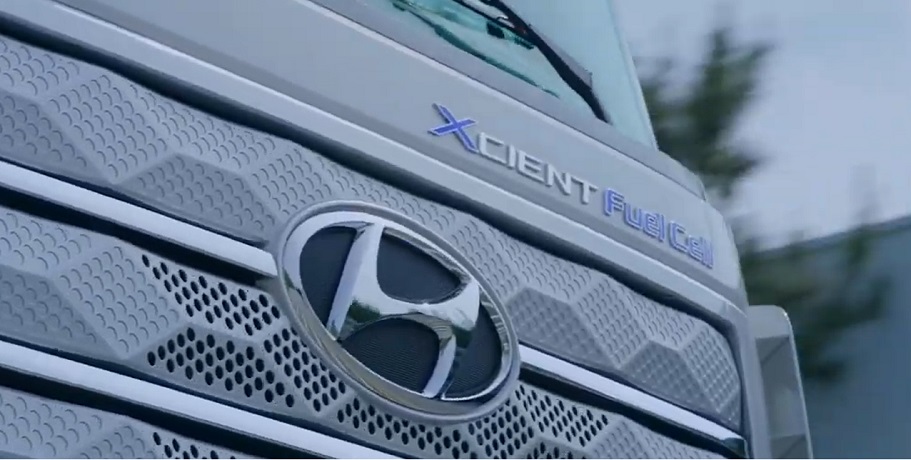 Last week, Hyundai announced that the Hyundai Xcient hydrogen fuel cell heavy duty truck upgrades have given it the same battery capacity as the GMC Hummer EV battery. This announcement has also suggested that the automaker intends to maintain its commitment to commercial fuel cell vehicle (FCV) development and production.

It will be delivering 1,600 of the Hyundai Xcient to European fleet customers by 2025. The upgraded version of the vehicle will begin in August. This FCV will be available in both 6×2 and 4×2 configurations. Its power comes from two 90-kilowatt fuel cell stacks. They provide the power for the 350 kw (469 horsepower) electric motor in a vehicle that has 1,649 pound-feet of torque.

The heavy-duty truck contains seven H2 tanks which can hold a combined 31 kilograms of fuel. The automaker added that it takes between 8 and 20 minutes to refuel the vehicle, depending on the ambient temperature. Lower pressure levels of 35 megapascals make it easier to store hydrogen and to dispense it. The vehicle’s range is estimated to be approximately 248 miles.

That battery capacity is about the same as the GMC Hummer EV pickup truck that isn’t long off its own release. The company has been applauding hydrogen fuel for some time. In fact, in December, the automakers top engineering and R&D exec said that it may be the intelligent choice when compared to large batteries for SUVs and large pickup trucks.

The first batch of 46 of the vehicle were delivered to Switzerland last year. That said, since then, the automaker claims that more than 466,000 miles. The company plans to ship 140 more of the trucks to the country by the close of 2021. Moreover, the truck will be headed for show in North America before the end of the year as well.

The automaker has also said that it has been considering China as another potential future market for the Hyundai Xcient.