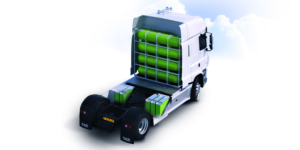 Hyzon Motors has signed purchase agreements for a total of 20 fuel cell trucks with subsidiaries of Dutch transport companies Jan Bakker and Millenaar & van Schaik. Up to three of the trucks are to be delivered before the end of 2021 and the rest in 2022.

Hyzon underlines the fact that these are “final purchase agreements” – in the industry, signed letters of intent are also often referred to as orders, but here they are to be binding orders. The first three vehicles are to be delivered in the fourth quarter of this year, the remaining 17 in 2022.

Hyzon says that it expects to manufacture the trucks in its European facility in the Groningen area of the Netherlands, where orders are being taken for deliveries of Hyzon-branded commercial vehicles worldwide. When the fuel cell vehicle maker established a European subsidiary last year and opened its European headquarters in the Dutch city of Groningen, the company said its drives would be built in the USA and that the assembly of the trucks and buses would be carried out by partners. In Europe, Holthausen Clean Technology builds the Hyzon trucks on the basis of DAF’s XF Space Cab tractor unit, where fuel cell trucks for the European market will also be produced. These production systems already appear to be in full swing: In April this year, Hyzon Motors announced that it had started production of 15 FC vehicles for the city of Groeningen to be delivered by the end of this year. The company also very recently launched a leasing service for heavy-duty fuel cell commercial vehicles in Europe.

The model that has been ordered is the HyMax 450 tractor with up to 550 kW of power and a range of up to 520 kilometres. The HyMax 450 is based on a truck chassis from DAF and is available as a chassis, tractor unit, box truck and crane truck for container transport. There is also a refuse truck version and a variant for wastewater treatment.

“We are excited to be engaging with transport and logistics organizations like Jan Bakker and Millenaar & van Schaik, to bring hydrogen fuel cell-powered trucks to the Netherlands,” says Hyzon CEO Craig Knight. “These contracts further underline the interest in Hyzon’s products in the European market, where we have seen strong uptake in zero-emission heavy vehicles.”

Millenaar & van Schaik is one of the largest asphalt transport companies in the Netherlands. The Jan Bakker group of companies consists of 17 individual companies – exactly which subsidiary ordered the Hyzon trucks has not been disclosed.

For Hyzon, the binding order from the Netherlands comes at a good time: In February of this year, Hyzon announced its IPO, planning to go public soon by means of a merger with Decarbonization Plus Acquisition Corporation (NASDAQ: DCRB, DCRBW).