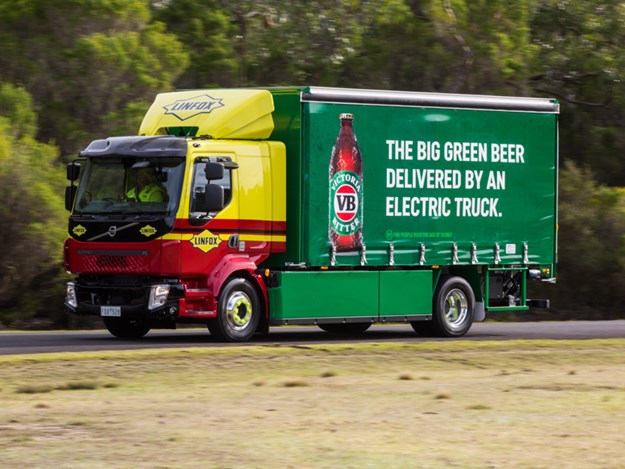 Linfox has added its first all-electric truck to its fleet and partnered with VB to deliver beer to retailers around Melbourne.

The Volvo truck will deliver beer in the same way as a regular diesel truck but in a sustainable way: transporting 100,000+ cans and stubbies each week from Asahi Beverages’ distribution centre in Melbourne’s west to bottle shops across the city.

Linfox says it plans to introduce “many” electric vehicles as production ramps up worldwide, but for now the Volvo VB-branded truck is the first mass-produced electric truck of its size – and the first Volvo FL all-electric truck – in Australia.

“Transitioning our deliveries to electric vehicles will help us achieve our ambitious sustainability goals of reducing our net carbon emissions across our entire supply chain by 30 per cent by 2030 and to zero by 2050,” said Robert Iervasi, group CEO at Asahi Beverages, which bought VB’s maker Carlton & United Breweries last year.

“Linfox has delivered VB for more than 50 years. It’s fitting these two Australian icons are taking this major step towards a sustainable future together.”

The Volvo has a range of 250km between charges, limiting its use to greater Melbourne, but introducing more electric-powered trucks to the streets will ease pollution in the city – and help reduce the carbon impact of both Asahi Beverages and Linfox.

“Australia’s domestic freight task has doubled in the past decade and will continue to grow,” said Linfox chairman Peter Fox. “To meet this demand, Australia’s road fleet will also grow and it is essential the fleet does this safely, efficiently and with reduced environmental impact.”