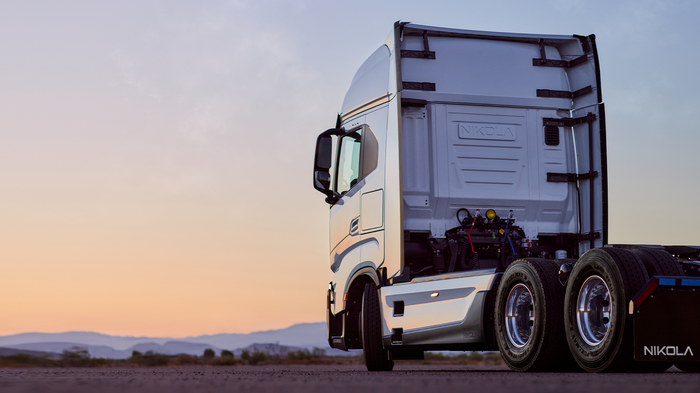 With the passenger vehicle market moving rapidly toward electrification, companies’ next focus is the heavy-duty segment. The need to decarbonize this segment of transport is clear. According to the International Council on Clean Transportation, heavy-duty trucks represent less than a tenth of all vehicles, but account for roughly 40% of the carbon emissions.

With its battery and hydrogen electric trucks, Nikola (NASDAQ: NKLA) hopes to decarbonize the heavy-duty transport segment. Let’s discuss what may or may not work for Nikola, and what it means for its stock.

A long road ahead

Nikola’s initial products include a battery electric truck, the Tre BEV, and a hydrogen fuel cell electric truck, the Tre FCEV. Additionally, the company believes that its key differentiator is its planned hydrogen fueling ecosystem including hydrogen production, procurement, and distribution. Nikola plans to offer a so-called “bundled lease model” which would include the cost of the truck, hydrogen fuel, and maintenance. This could be a smart strategy, considering that interest in fuel cell trucks could be rock-bottom in the absence of fueling infrastructure.© NikolaNikola Tre BEV.

Notably, Nikola plans to start producing battery electric trucks in the second quarter this year. Its truck has an estimated range of up to 350 miles and targets the short- and medium-haul market. On the other hand, Nikola’s FCEV truck is still far from production stage. The company expects to launch it in 2023, with production expected to start in the second half of 2023.

The Tre FCEV is expected to provide a range of up to 500 miles per fill and a refuel time of around 15 minutes. Moreover, the company is working on a sleeper cab that can go up to 900 miles per fill.

Nikola is working on developing a hydrogen fueling ecosystem and electric charging infrastructure for its trucks, starting with California. To this end, it has collaborated with numerous partners, including Arizona Public Service Company for low-cost electricity, TC Energy for hydrogen production and potentially for distribution, and Wabash Valley Resources for hydrogen supply.

Nikola delivered its first two Tre BEV trucks to TTSI for pilot testing in December. If these trucks complete trials successfully, and TTSI obtains certain government funding, it may buy up to 30 trucks in late 2022. In January, Nikola delivered pilot FCEV trucks to Anheuser-Busch, which has begun a three-month pilot for testing their viability in beverage hauling.

After years of troubles, things finally seem to be moving in the right direction for Nikola. However, there are some key risks that investors should consider if they are planning to buy the stock. First, whether Nikola’s trucks meet customers’ requirements and can operate safely is yet to be seen. Making hydrogen and battery electric trucks is a technologically complex process. There is a risk that the trucks won’t perform the way Nikola is expecting. Workhorse Group had to recall its vehicles after they were found to be non-compliant with the Federal Motor Vehicle Safety Standards.

Second, assuming Nikola’s trucks cross the initial hurdle and work fine in real-world operation, the company still might have a difficult time producing and selling them profitably. Not many pure-play electric vehicle (EV) players in the U.S., with the obvious exception of Tesla, are profitable right now.

Third, Nikola may not find enough demand, especially for its FCEV truck. Several new and established automakers have launched, or are planning to soon launch, electric class 8 trucks. Nikola will face tough competition from them. With greater expertise and financial resources, some of these players may have a significant edge over Nikola. Nikola’s potential competitors include Tesla, Volvo, Peterbilt, and Navistar.

Moreover, if battery technology advances fast enough to make battery electric trucks viable, fuel cell trucks may not find enough demand. And Nikola faces competition from the likes of Hyundai and Toyota even in the hydrogen fuel cell truck segment.

In short, even though Nikola seems to be progressing in the right direction, there is a long way full of risks before the company establishes itself as a serious player. Investors will find better options elsewhere in the EV segment.

How Cummins reinvented itself for a zero-emissions future