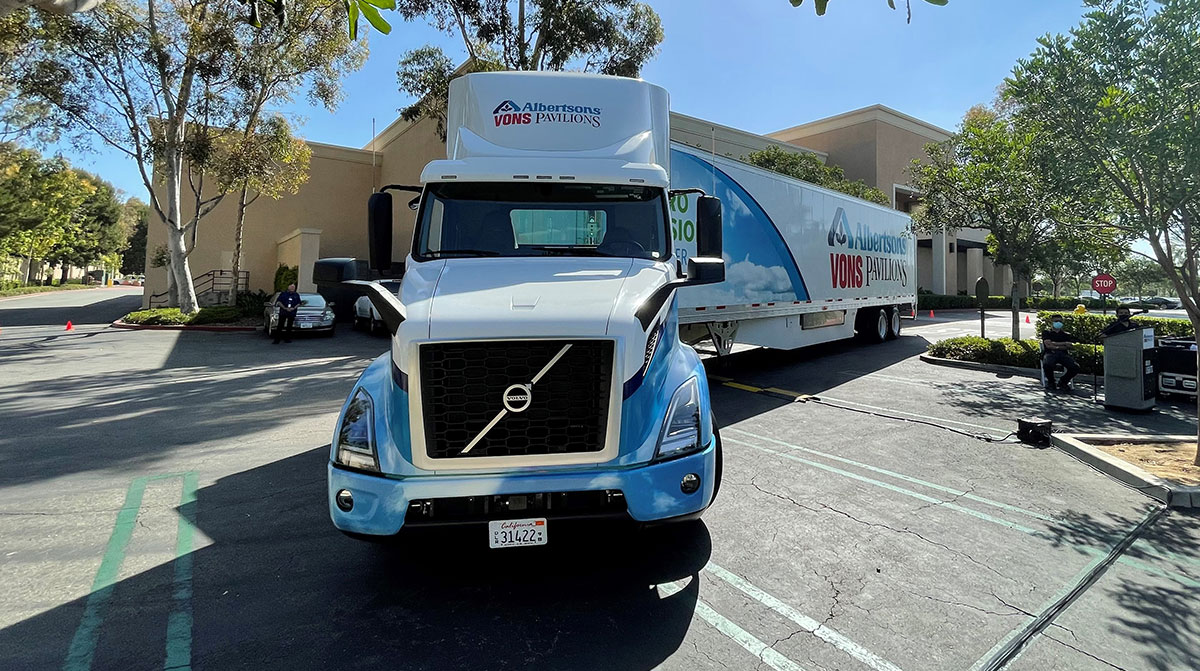 Albertsons Cos. completed the nation’s first delivery of a refrigerated grocery load with zero-tailpipe emissions technology by deploying a Volvo electric truck and an Advanced Energy Machines electric trailer.

The May 28 delivery of frozen food to a store in Irvine, Calif., represents a step forward in the effort to commercialize electric trucks and other green transportation equipment, local and state environmental regulators said at a news conference after the delivery.

“Albertsons is providing a great example of how this type of technology can reduce emissions and provide a sustainable zero-emission goods delivery option,” said Lisa A. Bartlett, an Orange County, Calif., supervisor and South Coast AQMD governing board member.

He said electric trucking “will also provide a better working environment for our drivers and grocery store staff.”

The grocery chain is an important Volvo customer. Its Southern California fleet uses only Volvo Trucks and covers 335 stores in a region that makes up the state’s southern half.

Although the delivery involved equipment just coming to market, it signals how many freight sectors can transition to zero tailpipe emissions, said John Boesel, CEO of Calstart, a nonprofit working to commercialize green transport.

“When you get a major OEM and a major fleet working together on an all-electric tractor-trailer rig, it sends a strong message that the technology is mature, reliable and ready to go,” Boesel said. “I would expect that Albertsons’ competitors will pay attention and will not want to be left behind using yesterday’s technology that is leading to climate change.”

Volvo is pushing rapidly into electric trucks. It launched the production of the VNR Electric at its New River Valley, Va., factory late last year. It has about 100 trucks ordered or in operation in the U.S., and has additional orders from customers in California and other states that it has not yet announced.

The VNR Electric is designed for regional heavy hauling. It has a range of 150 miles, and the powertrain produces 455 horsepower and 4,051 pound-feet of torque.

Advanced Energy Machines has about 100 electric trailers in service, said Robert Koelsch, CEO of the Mesa, Ariz.-based green technology company. It uses rooftop photovoltaic panels to produce 25% to 50% of the refrigerated unit’s energy needs, depending on the weather and the temperature required for the cargo, he said.

While they cost about four times a conventional diesel refrigerated trailer, they have a payback at about 10,000 hours of use, Koelsch told Transport Topics.

The program is a collaboration among Volvo Trucks North America, South Coast AQMD and 12 other organizations. It is funded by a $44.8 million grant from the California Air Resources Board and an additional $36.7 million from Volvo Group. Volvo built 25 trucks as part of the project, and they are now being leased to customers through its financial services unit.

“We are confident that the Volvo VNR Electrics Albertsons is deploying in Southern California will enable the company to not only reduce its emissions, but to make reliable daily deliveries to its grocery stores throughout the region,” VTNA President Peter Voorhoeve said in a March 28 news release.

In April, Volvo scored its largest electric truck order to date. Quality Custom Distribution, a national food service logistics supplier, leased 14 Volvo VNR Electric trucks for its Southern California delivery routes. It will begin to operate the vehicles out of its distribution center in Fontana later this year.

“The experience gained from this program will help accelerate battery-electric truck adoption in QCD’s fleet, as well as other last-mile delivery fleets,” Mike Douglas, QCD senior director of strategic procurement, said when the deal was announced in April.https://platform.twitter.com/embed/Tweet.html?creatorScreenName=TransportTopics&dnt=false&embedId=twitter-widget-0&features=eyJ0ZndfZXhwZXJpbWVudHNfY29va2llX2V4cGlyYXRpb24iOnsiYnVja2V0IjoxMjA5NjAwLCJ2ZXJzaW9uIjpudWxsfSwidGZ3X2hvcml6b25fdHdlZXRfZW1iZWRfOTU1NSI6eyJidWNrZXQiOiJodGUiLCJ2ZXJzaW9uIjpudWxsfSwidGZ3X3R3ZWV0X2VtYmVkX2NsaWNrYWJpbGl0eV8xMjEwMiI6eyJidWNrZXQiOiJjb250cm9sIiwidmVyc2lvbiI6bnVsbH19&frame=false&hideCard=false&hideThread=false&id=1398331954865528835&lang=en&origin=https%3A%2F%2Fwww.ttnews.com%2Farticles%2Fvolvo-albertsons-complete-first-zero-emission-frozen-food-shipment&sessionId=acb10921fd8630cff2f869b03bf8c41ce7d6ea1c&theme=light&widgetsVersion=82e1070%3A1619632193066&width=550px

QCD operates a fleet of 700 Class 8 diesel tractors, of which than half are Volvo models.

California, especially Southern California and the region that stretches from the giant Los Angeles and Long Beach ports to the distribution and warehouse centers about 70 miles east, has become a testbed for electric trucking.